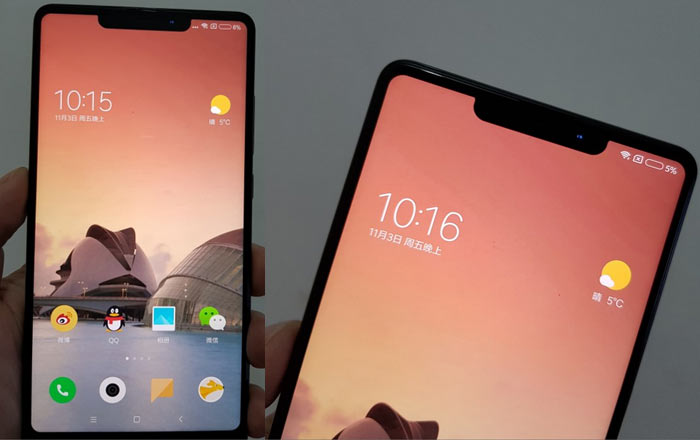 Xiaomi might be working on a sequel to the Mi Mix 2, evidenced by a couple of hands-on photos of the alleged Mi Mix 2s. The photos surfaced on Weibo recently, so its origins remain sketchy at best.

As some people have pointed out, the images could well be fake since it would easy enough for someone to download a wallpaper or app meant to mimic the look of the iPhone X’s notch on the existing Mi Mix 2. The handset notably has its selfie camera located at the bottom, but the photos show that the front-facing camera has been placed up top.

Either this phone doesn’t exist and the wallpaper/app has included a fake selfie camera, or it’s real and Xiaomi has decided to relocate the lens to a more conventional spot. It’s telling that the leakster has cut off the bottom of the smartphone so we can’t make out if there’s a camera residing there.

This is the first time a Mi Mix 2s has been uncovered, so we’ll have to wait and watch for more evidence before we can draw any sort of conclusion. It wouldn’t be completely out of the question for Xiaomi to develop another version of its bezel-less flagship, but the choice to copy the Essential Phone and iPhone X is questionable.

Android apps haven’t quite made room for such cutouts since it requires an extra amount of effort to accommodate in a world where the vast majority of devices don’t have notches. Xiaomi may just dive in anyway, but it would be best to take any leak with a healthy dosage of salt.