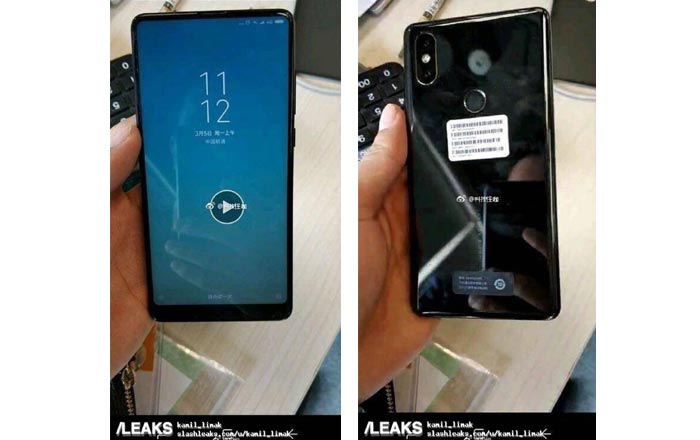 Xiaomi’s Mi Mix 2S is getting leaked on a regular basis now, but many of the reports contradict themselves when it comes to certain features. For instance, the latest batch of photos of the front and back of the handset suggest that the front-facing camera is going to be placed at the bottom-right like always.

This goes against a recent video of the Mi Mix 2S which had the selfie snapper housed within a notch at the top-right corner. A firmware-based leak prior to that had claimed that the lens would be fixed at the bottom-right. It’s difficult to make out which source is ultimately going to be proven right as of now.

Getting back to the picture above, the image suggests that the Mi Mix 2S will look similar to its predecessor. The left, right, and top borders are nearly invisible, but the one at the bottom is a bit thicker than the others.

The back paints a slightly different picture as it features a glossy style brought about by a layer of glass. The material has probably been introduced to facilitate wireless charging. There’s a round fingerprint sensor at the center, so don’t expect an under-glass fingerprint solution.

The most striking aspect of the rear is the presence of dual cameras arranged vertically, just like how Apple does with the iPhone X. The Redmi Note 5 Pro has an identical arrangement, so it’s not too far out of the question for Xiaomi to incorporate this design into the Mi Mix 2S as well.

The Mi Mix 2S is due for launch on March 27. Expect more leaks to arrive till then.