While Xiaomi has confirmed that the Mi Mix 2 is coming out on September 11, the brand has been light on details in the days leading up to the launch. Here to fill in those gaps are a couple of Weibo-sourced reports with specs and images galore.

Starting off with the live photo above, it appears to be the front panel of the Mi Mix 2. The handset is assumed to feature even thinner bezels than its predecessor and the snapshot pretty much confirms that piece of speculation. The size hasn’t been mentioned, but the phone is expected to measure more than 6-inch diagonally.

The second report backs up this assumption, pinning down a 6.2-inch 2960 x 1440p display. The leakster behind it has posted a number of images of an alleged Mi Mix 2 showing its specifications in detail. It’s apparently managed to gets its hands on a Snapdragon 836 processor and Android 8.0 Oreo. 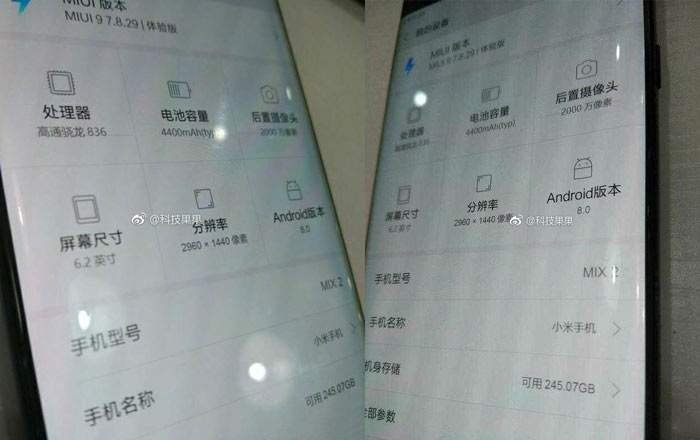 The two features seem a bit far-fetched on the whole given the fact that the former hasn’t even been announced and the latter came out just 2 weeks ago. Neither is impossible though, so it’ll be interesting to see whether Xiaomi will be able to pull off a surprise on launch day.

Other specs mentioned by the leak include a 4400mAh battery, MIUI 9, 256GB of ROM, and a 20MP rear camera. The last is presumably part of a duo since the Mi Mix 2 is probably going to feature a dual-camera system. Stay tuned for more on the handset up until its September 11 arrival.