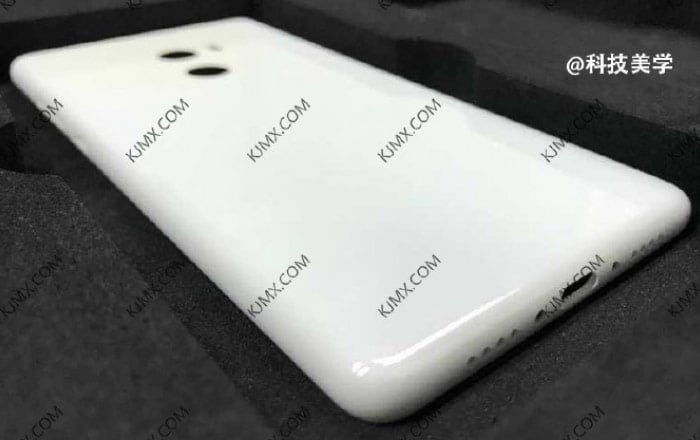 Rumors about the Xiaomi Mi Mix 2 have been heating up over the past few weeks, with a number of reports painting a picture of the bezel-less phone. Two separate reports have now come out showing off the back of the device and revealing its launch date.

The image above comes courtesy a Weibo leakster. The alleged Mi Mix 2 is seen in white and looks like it’s been made out of ceramic. Two speakers can be seen at the bottom, straddling a USB Type-C port. Two circular cutouts are visible up top.

Unfortunately, the photo is a bit out-of-focus in that particular area. It’s hard to tell whether the modules are a pair of cameras or a single camera and a fingerprint scanner. Past rumors have alleged that Xiaomi was working on an under-glass solution for the Mi Mix 2, so hopefully the former possibility is the real deal.

Also See: Xiaomi, Google may team up to launch an Android One phone

The other big piece of news comes courtesy a Chinese site called TechWeb. The publication asserts that the Mi Mix 2 will be making its debut on September 12. Interestingly enough, that’s the same day the iPhone 8 is expected to arrive.

If true, Xiaomi will be setting itself up to compete with one of the most highly-anticipated smartphones in the world. Both are expected to be bezel-free wonders with 3D facial recognition abilities. However, the original Mi Mix has so far been a China-only affair. It remains to be seen whether its sequel will make its way outside its home base.