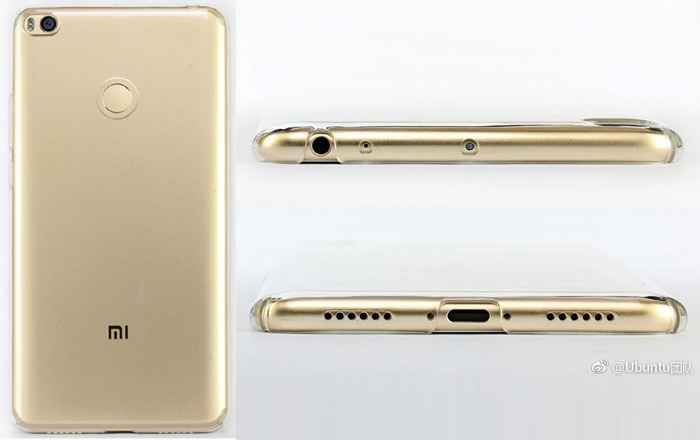 The Mi Max 2 has popped up online again, with a Weibo leak by Ubuntu giving us what is probably the first good look at the device. While its front and side surfaces haven’t been shown, the handset’s back, top, and bottom can be seen in the image.

The alleged Mi Max 2 in question has been fitted inside a clear case. Xiaomi appears to have adopted an iPhone 7-esque look for the phablet, leaving its back bare save for curved antenna bands and a fingerprint scanner. A dual-LED flash unit sits on the top-left corner next to the camera module.

Down under, Xiaomi’s swapped out the microUSB port for a USB Type-C one. Two speaker grilles flank it on either side. A 3.5mm headphone jack, IR blaster, and secondary mic can be spotted up top. There weren’t any specs to accompany the leak, but previous reports have sketched a brief idea of what to expect.

The Mi Max 2 may run on a larger 5000mAh battery which could just power the same 6.44-inch 1080p screen. A Snapdragon 626 processor might beat at its heart, helped along by an Adreno 506 GPU and 4GB of RAM. To recall, its predecessor came in Snapdragon 650 and 652 options, so there’s a chance the company will go the same route for the upcoming device by offering two CPU choices.

The original Mi Max came out in May 2016. Xiaomi will likely stick to the same timeframe for the sequel. Some even say that the brand plans to announce it alongside the Mi 6 on April 19. We’ll have to wait and see whether this comes to pass.