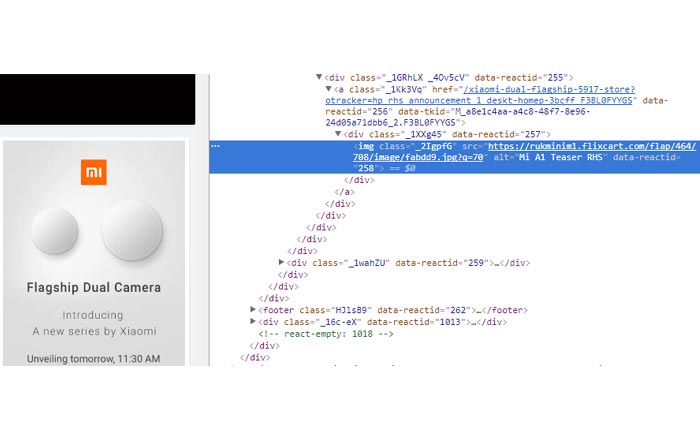 Xiaomi has been busy hyping up its next smartphone launch in India via its social media channels, talking up the handset’s dual cameras. It hasn’t revealed what the name of the device is yet, but a new report has delved into partner Flipkart’s source code and obtained proof that the Mi A1 will be getting unveiled in the country.

Indian blog Smartprix has in fact picked up 2 instances of the name Mi A1 hidden within Flipkart’s source code, all but confirming that it’ll be the handset Xiaomi will be revealing to the world tomorrow. The handset has a slightly complicated history, with many claiming that it’s an Android One phone which is based on the Mi 5X.

The Mi 5X was initially believed to be arriving in India on September 5, but there’s now plenty of proof that the Mi A1 will be hitting the country in its stead. The latter will presumably run on a pure version of Android since it’s part of Google’s Android One program. It’s not clear if the offering will run on Nougat or Oreo at launch.

Even if it does run on Nougat, it’ll be guaranteed an upgrade to Oreo, along with regular security updates. Xiaomi has frequently been criticized for not keeping up with the latest Android versions, focusing more heavily on its own MIUI platform. The Mi A1 could serve to broaden its appeal among fans of unfiltered Android.

In terms of specs, the Mi A1 is expected to boast of a minimal-bezel screen, a Snapdragon 625 processor, 64GB of ROM, 4GB of RAM, and dual 12MP cameras similar to the Mi 6’s own pair. We’ll let you know the device’s price and availability details as soon as it’s made public.