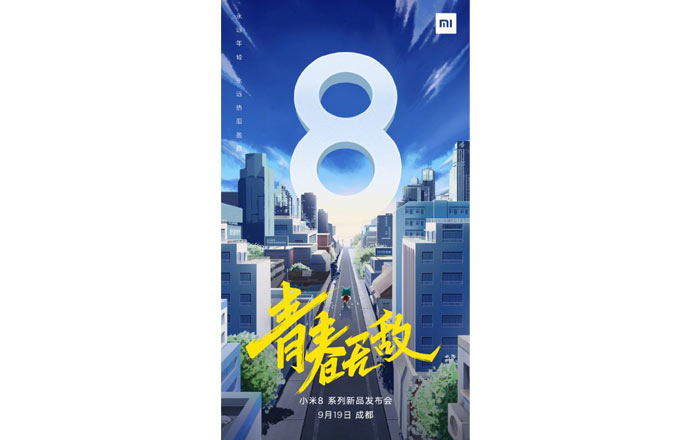 Xiaomi’s just announced its next major event taking place on September 19 in China. The press invite for the occasion doesn’t directly announce which phone or phones the brand is planning to show off, but there are a couple of obvious clues.

The biggest one is the giant 8 which the Xiaomi mascot is running towards. This is a pretty obvious sign that a Mi 8 series device is coming out. There have been talks about a handset with the model number M1808D2TE over the past few days, but no one seems to know what it’s going to be called.

Some say it’s the Mi 8X, others say Mi 8 Youth. Most are leaning towards the latter because of a separate teaser which emerged earlier this week. Whatever the name, speculation so far indicates that the smartphone will fall somewhere between the Mi 8 and Mi 8 SE in terms of specifications and looks.

The device recently made the rounds of TENAA, revealing that it has a 6.26-inch display with an FHD+ resolution. The ‘+’ is necessary because of the phone’s notch design and 19:9 aspect ratio. The dual cameras at the back may have a 12MP + 12MP configuration and the front-facing sensor may have a 24MP one.

While the TENAA-sourced images feature a fingerprint scanner at the back, previous ones didn’t have any fingerprint readers. The former is probably more likely because of the smartphone’s mid-range positioning. It wouldn’t make sense for Xiaomi to have an under-display sensor in a non-flagship device.

Other rumored specs include a Snapdragon 710 processor, a 3250mAh battery, and Android 8.1 Oreo with MIUI. Xiaomi might sell the device in 4GB/6GB/8GB and 32GB/64GB/128GB options. There’s only a week to go before the truth finally emerges on September 19. We’ll keep our ears to the ground for any notable leaks till then.