As expected, the Xiaomi Mi 8 launch is set to happen on May 31. The company has finally confirmed the date with a post on Weibo and a tweet by its global spokesperson Donovan Sung. 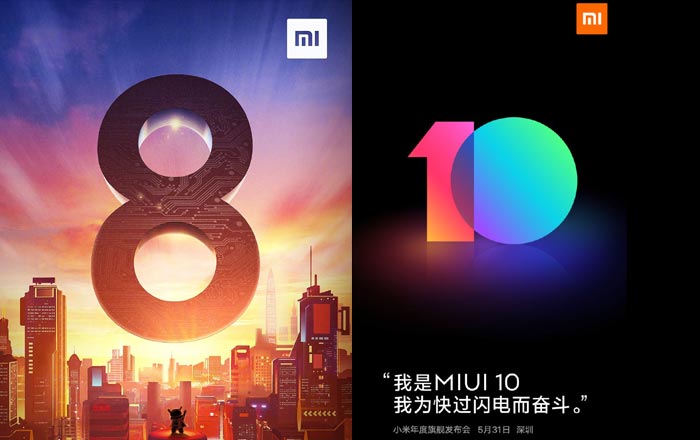 Sung says that Xiaomi’s going to celebrate its eighth anniversary by unveiling the Mi 8 at its annual flagship product event in Shenzhen on May 31. He doesn’t mention any other product in the tweet. It seems the brand might just be skipping the Mi 7, as many have predicted.

It’s either that or both phones are going to make their debut at the upcoming event. The Xiaomi Mi 8 launch is also going to introduce MIUI 10. The firm confirmed this on Weibo with a poster talking about how the software’s going to be faster than lightning.

The Mi 8 will probably be bundled with MIUI 10. Not much is known about the OS except that it’ll likely be based on Android Oreo. The flagship handset has been a frequent guest at the rumor mills of late. The latest leak features a hands-on image of the smartphone.

Based on the photo, Xiaomi may just bless the device with a transparent back. We can clearly see a Qualcomm Snapdragon processor inside, alongside various other components. The vertical dual camera matches the one seen in earlier leaks. On the flip side, there’s a notch at the top and narrow bezels all around.

However, the Xiaomi logo can’t be seen anywhere and the screen is blank. As a result, there’s no way of knowing for sure whether this device really is the Mi 8. If it is, it’ll probably be a special edition of the smartphone. The handset in the images notably has a red button on the right, perhaps an indicator of its limited-edition status.