A couple of hands-on images of the Xiaomi Mi 7 leaked recently revealed that the phone would be getting its hands on a notch at the top. There may actually be a good reason behind the cutout though, as a new image hints that the phone will have the Android equivalent of Apple’s Face ID.

If the photo above is accurate, Xiaomi will become the first Android manufacturer to adopt an iPhone X-like TrueDepth camera system. OEMs so far have just adopted the notch look and placed the selfie camera inside, pairing the lens with Android’s in-built face unlocking mechanism.

Xiaomi might be looking to break away from this trend by deploying its own Face ID clone. The render above indicates as much and looks surprisingly similar to Apple’s notch array (see below) which includes an Infrared Camera, Flood Illuminator, Dot Projector, Proximity Sensor, Ambient Light Sensor, Speaker, Microphone, and 7MP camera. 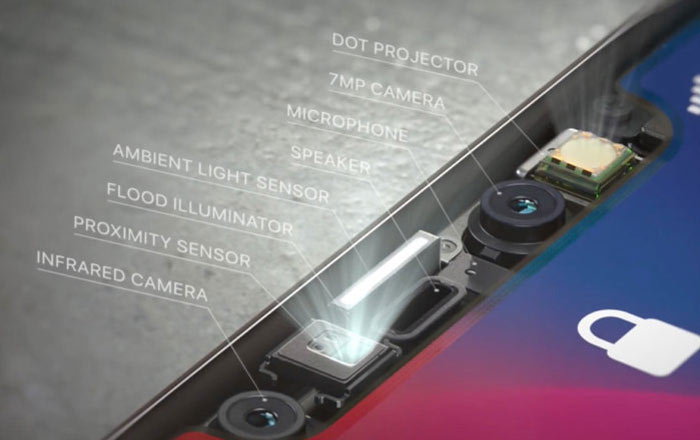 The previously leaked images of the Mi 7 did feature a rather large cutout, so there might be some merit to the new Weibo rumor. The tipster notably refers to the phone as the Mi 8 in his post. There is a certain amount of confusion in this area, as some believe the Mi 7 will actually be called the Mi 8 and others say the Mi 7 will be launched alongside a special edition Mi 8.

Both camps predict this based on the fact that Xiaomi wants to celebrate its eighth anniversary with a new phone, just like Apple did with the iPhone X. We’ll find out the truth of the matter soon enough when May 23 comes along.