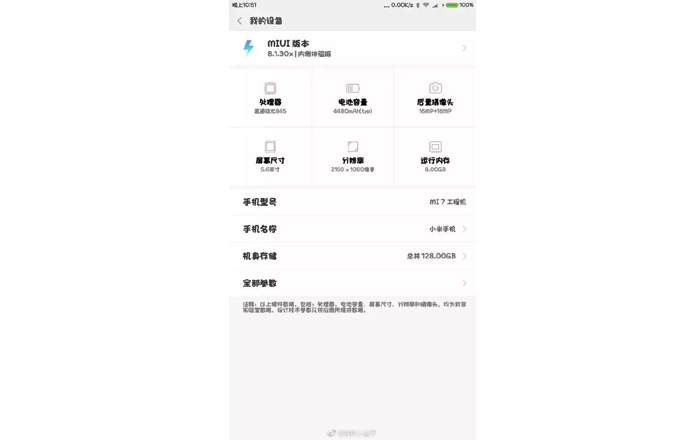 Xiaomi’s flagship Mi 7 is nowhere to be found right now, with the latest round of rumors alleging that it is getting delayed to April or May. Plenty of people assumed that it would be coming out at the MWC 2018 this month, but now reports point to the Mi Mix 2s arriving in its place.

It’s in the midst of this confusion that a new leak has arrived claiming to be a screenshot of the Mi 7. It indicates that the phone is getting upgraded with an impressive 8GB of RAM, a big change over its previous variant’s 4GB/6GB of RAM. The memory spec may be paired with 128GB of ROM.

This is probably the top-end variant of the Mi 7, unless Xiaomi decided to do something different this year and release only one version. The handset appears to pack a large 4480mAh battery as well. Its predecessor carried a 3350mAh battery, so this is again a major change if true.

Unsurprisingly, the leak hints that the Xiaomi handset will be carrying a top-of-the-line Snapdragon 845 processor. It might clash with the Mi Mix 2s here, since some claim that the bezel-less device will snatch the crown of being the first to run on the SoC.

If not, there’s also Samsung to consider with its Galaxy S9 pair. The screenshot further points at a 16MP + 16MP dual camera setup and 5.6-inch 2160 x 1080p screen. The latter confirms the presence of an 18:9 aspect ratio. There’s also an MIUI version listed up top, but it’s not clear if it refers to a stable version of MIUI 8 or a MIUI 9 Developer ROM.