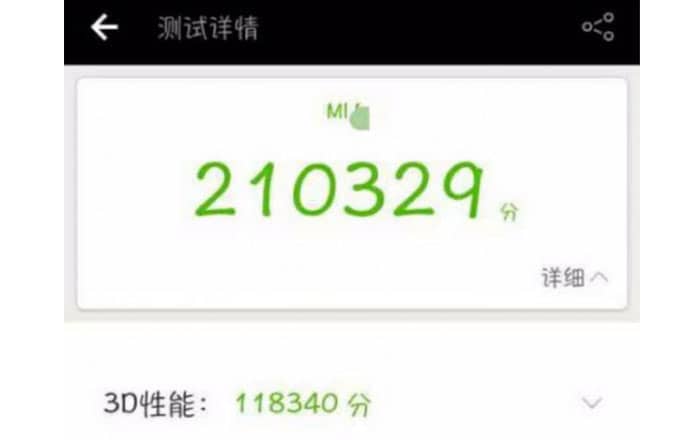 Xiaomi is yet to make anything official about its new flagship the Mi 6, but the many leaks that are floating around aren’t stopping fans from making speculations. The latest tidbit to arrive is a screenshot showing that the phone has managed to grab an AnTuTu score of a whopping 210329.

This could easily make the Xiaomi Mi 6 the most powerful smartphone on the planet; based on AnTuTu findings at least. That is because the same benchmark test pegs the iPhone 7 Plus as its winner right now, with 183106 points.

If just the Android territory is to be explored, the OnePlus 3T which is powered by a Snapdragon 821 CPU and 6GB of RAM comes out as the winner with a score of 163578. The Mi 6 will really need to have some killer specifications then in order to grab 210329 points.

No prizes for guessing then that the newly unveiled Snapdragon 835 chipset will be present inside this upcoming Xiaomi device. It features an octa core processor, with four cores clocked at 2.45GHz and four energy efficient cores clocked at 1.9GHz.

This chip is being built on the 10nm FinFET fabrication process by Samsung, and is claimed to offer 27 percent higher performance than its predecessor. Moreover, it is also touted to consume 40 percent less battery.

We are currently expecting the Xiaomi Mi 6 to be unveiled on February 6, but nothing official has been mentioned by the company yet. We’ll have more on the device once additional details are out.