Xiaomi’s first flash sale for the 16GB Mi 4 took place earlier today and in just a couple of weeks, the company will also start offering the 64GB model. The higher capacity option is of course, much desired as there’s no microSD card slot on the flagship smartphone and we expect to see it be in more demand than the base model.

The 64GB Xiaomi Mi 4 will debut on February 24 and it’ll be priced at Rs 3000 more than the 16GB model. So that’s a retail tag of Rs 23999, making the phone a very attractive pick. However, you’ll be paying a bit more than what the OnePlus One is selling at with very similar specs and a larger display. 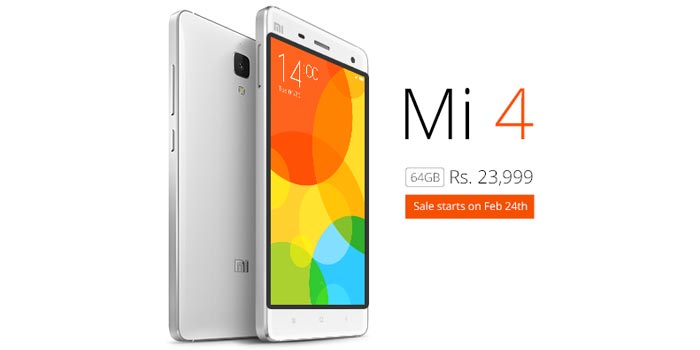 It basically all comes down to preference whether you want a phone which is easy to use in one hand or a phablet and the latest MIUI 6 interface or the newest version of Google’s Android. The Xiaomi handset flaunts a pretty attractive design and it also has a very durable build. A metal frame encompasses all components and there’s Gorilla Glass OGS screen protection to prevent damages to the 5-inch 1080p display.

Additionally, the phone offers 3GB of RAM and a 2.5GHz quad core Snapdragon 801 SOC which makes it an even more compelling pick over the Honor 6 from Huawei. The Mi 4 also comes with some of the best imaging components from Sony as there’s an 8MP front snapper and a 13MP rear shooter, both with an f1.8 aperture.

Here’s a roundup of the key Xiaomi Mi 4 specs:

Xiaomi is still to disclose how many units of the 64GB Mi 4 it’ll offer on February 24 and registrations for the sale are yet to commence, so stay tuned for an update.