Xiaomi’s currently in a flurry of Redmi Note-related activities, releasing two new color options for the Redmi Note 4 and preparing to bring the handset to India. Now a new Weibo leak hints that the brand is in the midst of working on a successor to the phone called the Redmi Note 4X.

The Redmi Note 4X is apparently going to feature updated specs like a Snapdragon 653 processor, 64GB of internal storage, and 4GB of RAM. The previous variant notably offered 2GB or 3GB of RAM, 16GB or 64GB of room, and a MediaTek Helio X20 SoC.

The Redmi Note 4 is expected to carry a Snapdragon 625 CPU when it hits India, so the presence of a Snapdragon 653 chipset in the upgraded model isn’t that far out of left field. Other than the written Weibo post, there’s also a hands-on image of what appears to be the rumored device’s system information.

Also Read: Xiaomi Mi 6 launch might be delayed to April 2017

The snap showcases the name of the handset to be the Redmi Note 4X and reveals that it will run on Android 6.0.1 Marshmallow with a layer of MIUI 8.1 on top. It also confirms the 64GB/4GB configuration and adds that the processor will clock in at 2GHz. 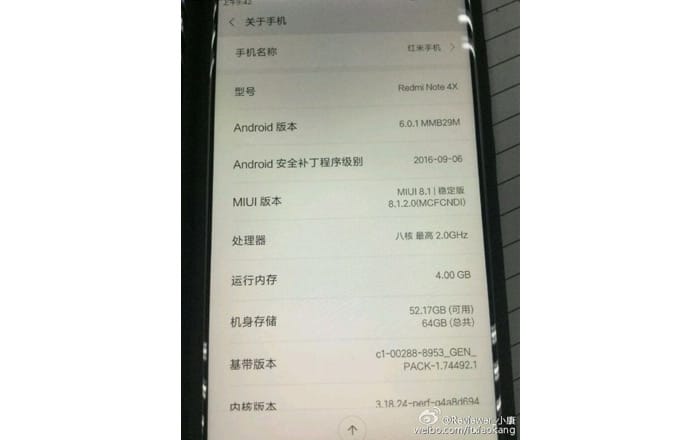 In related Xiaomi news, the brand has launched a Mi Explorers program which promises to give away a new Redmi device, likely the Redmi Note 4, before anyone else gets it. The company’s main push behind the endeavor is to gather user data and feedback before the handset’s arrival. You can sign up for it here.