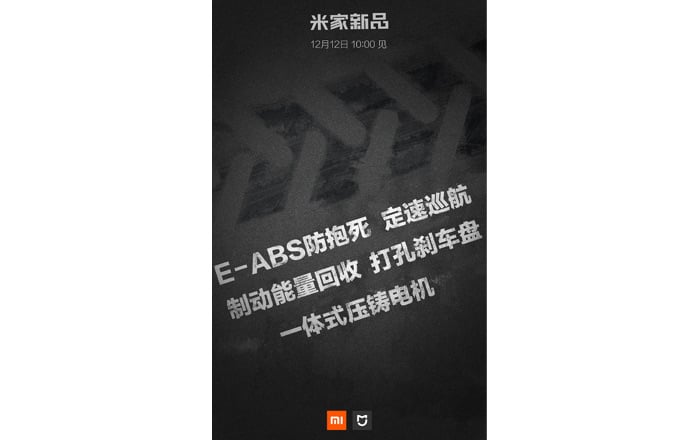 Xiaomi may be getting ready to launch a new car or bike powered by electricity under its MIJIA sub-brand. The company has announced that its hosting an event on December 12 where it’s going to launch a new product without specifying what exactly it could be.

The poster for the occasion prominently features skid marks in the background, implying that the offering will be some sort of Xiaomi vehicle. The text on the teaser talks about how it’ll have brake energy recovery, cruise control, perforated brake discs, one-piece die cast motors, and an E-ABS anti-lock braking system.

FoneArena alleges that the first teaser for the event mentioned that the product would have hot-melt pneumatic tires. However, this poster was apparently removed and replaced with the image seen above. Xiaomi’s no stranger to vehicles, having unveiled the QiCycle back in June this year.

The QiCycle was Xiaomi’s first-ever electric bike. The cycle could be folded and came with IPX5 water resistance. It’s possible the new arrival is an updated version of the QiCycle. It could even be the brand’s first electric car.

Xiaomi CEO Lei Jun had notable gone on the record previously to state that it was not planning to manufacture electric cars for at least 3 to 5 years. This throws a bit of a damper on the electric automobile theory, but it’s possible the firm may debut something like LeEco’s LeSEE driverless electric car concept and actually sell the vehicle later.

We’ll keep you updated on what Xiaomi pulls out of its hat come December 12.