Xiaomi has new products to unveil on March 31, the guessing game begins

Xiaomi has started teasing its upcoming event which is slated for March 31 and we could be seeing multiple devices go official. The images don’t really say anything about what the company plans to reveal, but it’s confirmed that new products will be the main highlight.

A post on the official MIUI forums notes that the Chinese OEM will be turning 5 next month and there are a lot of surprises planned for fans. On March 31, Lei Jun, CEO of Xiaomi, will reveal new hardware in China and hints of the products have been posted. The first one shows the company’s only tablet with the words ‘what is your optimum and preferred screen size of Mi Pad?’ 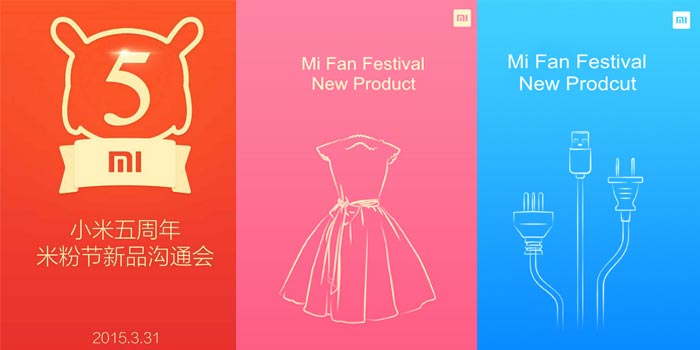 This suggests that there could be a new slate coming soon. The second teaser shows a dress, hinting at a possible wearable and the third picture shows two wall plugs and a USB cable which point to a new accessory or new charging technology. In total, there should be at least 3 new devices at the event next week.

Also read: Xiaomi might soon be shivering in its pants

From the rumor mill, there are a total 3 gadgets awaiting launch. First is the super affordable Redmi phone which is very similar to the Redmi 2 in design and hardware, but features a Lead Core processor. Then there’s the Redmi Note 2 smartphone which is not to be mistaken for the 64-bit Redmi Note 4G dual SIM.

The upcoming phablet will have an octa core 64-bit processor, a better display and other improvements. We recently seen the Xiaomi Ferrari smartphone popup and was shown to be a 5-inch mid-range phone on a benchmark, but could very well be the Redmi Note 2. And back in November of last year, a 9.7-inch tablet also made an appearance carrying mid-range specs and LTE connectivity.

We should see these Xiaomi devices go official at the event next week and could there be a smartwatch too?