A couple of days back we reported that Xiaomi could be launching the new Redmi 2 smartphone in India, but new information suggests that the device might not be the only product to get unveiled this week. There’s a good chance that the company will also bring the Mi Pad to India which was previous expected to arrive in the country back in January.

As you probably know, the company is holding a competition where you have to guess 3 words from a word puzzle to win priority passes to ‘get the all-new Mi product.’ The puzzle was shown to carry the words Snapdragon, expandable, quick charge and wide-angle, but what we didn’t know was that everytime the page is refreshed, a new brain teaser shows up.

As you can see in the image above, the words microSD, dual SIM, Nvidia and Kepler are also mentioned. What’s interesting is that the Redmi 2 comes with a Snapdragon chipset and the only device from Xiaomi to offer an Nvidia SOC with Kepler graphics is the Mi Pad. The former offers dual SIM card slots and expandable storage, while the latter device doesn’t have cellular support.

This more or less confirms that there will be two new devices on March 12. Also, there’s a possibility that the words ‘all-new Mi product’ actually points to something that’s yet to go official from the company. And it could be a new tablet as we’ve seen a Snapdragon powered device get benchmarked last year. The slate is a mid-range one and everything we know about it is available at this link. 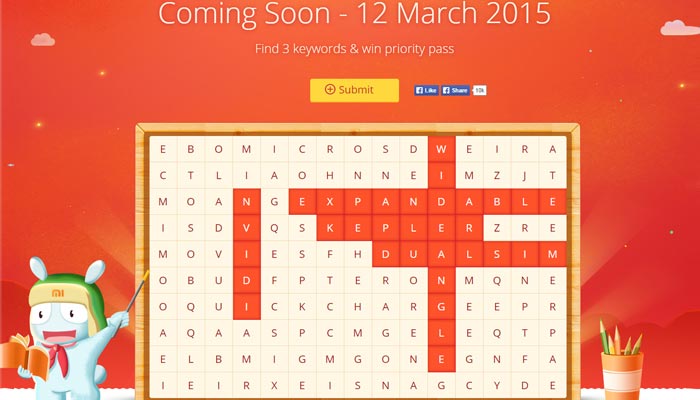 Whether Xiaomi will indeed launch the Redmi 2 with the Mi Pad or the latter and a brand new Snapdragon tablet, we’ll only know for sure on March 12, so stay tuned for an update.