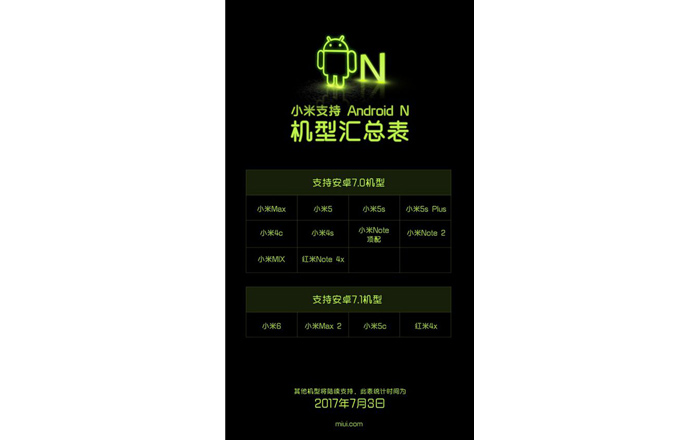 Xiaomi has officially announced which of its phones will be getting the highly-coveted upgrade to Android 7.0 and 7.1 Nougat. The brand has included 14 devices in all, with one surprising omission.

It should be noted that the list contains handsets which have already gotten promoted to Google’s latest OS and those which are yet to be updated. For example, the Mi Max began receiving its Nougat-based MIUI beta upgrade last month. The announcement further cements things so customers won’t have to wonder when their phone’s chance comes.

Xiaomi has divided its list into 2 sections namely those smartphones which are set to be blessed with Android 7.0 Nougat and those which are getting Android 7.1 Nougat. Members of the former section include the Mi Mix, Mi 5, Mi 5s, Mi 5s Plus, Mi Max, Mi 4c, Mi 4s, Mi Note, Mi Note 2, and Redmi Note 4X.

Newer devices like the Mi 6, Mi 5c, Mi Max 2, and Redmi 4X are part of the Android 7.1 update group. The Redmi Note 4 is nowhere to be found on either list. This is pretty strange considering how popular the handset is. Xiaomi could still give it the Nougat treatment at a later date, but for now it seems the phone won’t be promoted alongside the others.

Xiaomi is notoriously slow when it comes to OS updates, choosing to focus on its own MIUI skin more often than not. MIUI 9 is due for a release soon, so we’ll probably be hearing more about it in the weeks ahead.