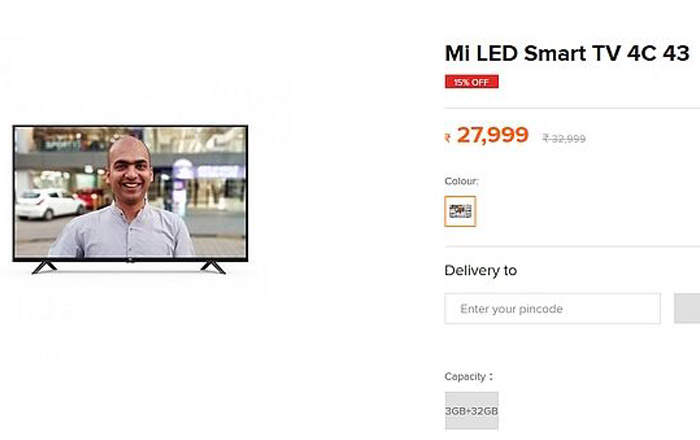 Xiaomi accidently put one of its upcoming Mi TV models up for sale on its Indian site recently, in a mix-up that has since been corrected. The page was live long enough for people to grab screenshots though.

To recall, Xiaomi is actually hosting an event on March 7 when it plans to announce a new line of televisions. It’s already launched the 55-inch Mi TV 4 in India at Rs 39999. It looks like the 43-inch Mi TV 4C will be joining it soon, priced at an even more affordable Rs 27999.

The listing indicates that this is a discounted rate which has come about after cutting off 15% from the original cost of Rs 32999. Keep in mind that this was an accidental listing and the official cost might not be the same. After all, the 43-inch Mi TV 4C was launched at CNY 1849 (roughly Rs 18999) in China last year.

Dubbed the Mi LED Smart TV 4C in India, the device offers plenty of bang for your buck in the style of most of Xiaomi’s products. It comes with a 1080p display, DTS Audio, Dolby sound support, Wi-Fi-ac support, 3GB of RAM, 32GB of ROM, Bluetooth 4.2 support, HDR 10 support, and a quad-core Amlogic T962 processor.

Other than the 4C, Xiaomi may also go ahead and launch the 32-inch Mi TV 4A. The television made its debut last year at CNY 1099 (approx Rs 11290). The company’s also been busy unveiling new TVs in its home country of China, with the latest 40-inch Mi TV 4A coming out over the weekend. It probably won’t hit India so soon, but could do so eventually.