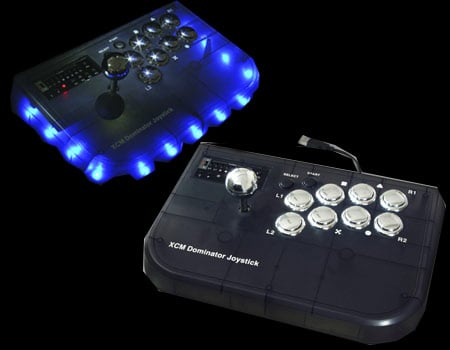 Adorning an arcade-style stick form factor, the Dominator Joystick aims to solve some common problems faced by PS3 owners. One of this being that a normal controller joystick makes it next to impossible for gamers to combine 4-8 different button attacks. Also proper timing to carry on with special moves is missing in a normal controller. Addressing this issue, the Dominator Joystick allows players to operate with attack combinations effortlessly.

The device enables players to program the keys to a particular special button. On pressing the button, users will be ready to pull off all the special moves. Some other interesting features of the Dominator Joystick are the Combo Attacker and the Independent Rapid Fire function. Both functions give gamers a chance to dominate their opponents without any hassles.

In a translucent black case, the Dominator Joystick also includes blue LEDs around the edge and four memory buttons that allow players to store macros. This storage capability keeps the macros within a gamers reach by a simple click on the memory button.

Around mid of this week, the XCM Dominator Joystick for PS3 is expected to be available for around $89.99.