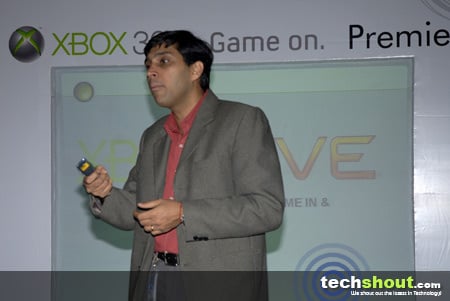 On September 17, 2007 while the rest of India was dreading those weekly Monday blues, we had an exciting event to attend. Microsoft India would be organizing a press event surrounding its much-awaited Xbox LIVE online gaming and entertainment network in the country. The event took place at Taj Lands End located in Bandra, Mumbai.

While it is already available in over 25 countries worldwide, India was left out of this for nearly a year now since its launch. We were awaiting this day with much anticipation as we couldn’t wait to get connected via Xbox LIVE using our Xbox 360 console.

Present at the event was Mohit Anand, Country Manager- Entertainment and Devices Division Microsoft India. He took the audience (which was quite scarce by the way) on a round trip of Xbox LIVE, explaining all the possible things that gamers could enjoy using this service.

So what are the activities that one can do on Xbox LIVE. Well, for starters the Xbox LIVE network connects you with over 7 million members across 26 countries that now includes India.

Here is some of the content that you will soon be able to access via Xbox LIVE: 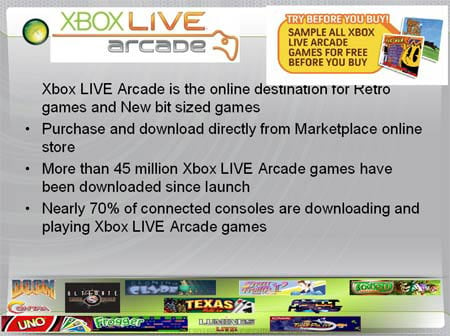 For those who are not into hardcore gaming, there are loads of casual games, puzzle games, card games, board games and arcade games such as coin-operated and retro classic.

And for those who cannot do without connecting with their friends and chatting, there’s the option of using Windows Live Messenger that allows you to text chat while playing games. A very useful peripheral for the purpose of easy texting was unveiled at the event. Called the Chatpad, this peripheral is required to be attached to the Xbox 360 controller.

Mr.Anand said that the launch of Xbox Live in India is a major milestone, and he also stressed on the fact that this service is one of the USPs of the Xbox 360 console.

When asked whether any India-centric content would be available, Mohit Anand assured that we would be seeing such localized content ‘very soon’.

Other Xbox 360 accessories besides the text input device (chatpad) unveiled at the event were the wireless headset and the Webcam which would aid gamers when connected to millions of other people via Xbox LIVE.

Xbox Live will offer two types of subscriptions to Indian users, Silver and Gold. The main difference between the two is that Silver card subscribers will not be able to play games in the multiplayer mode via the Xbox Live service.

Also present at the event was Juan Posada, senior global marketing manager for Xbox LIVE at Microsoft’s Entertainment and Devices Division. He gave all those present a demonstration of the Xbox LIVE service as he showed everybody the popular ‘Forza Motorsport 2’ game between two random players. 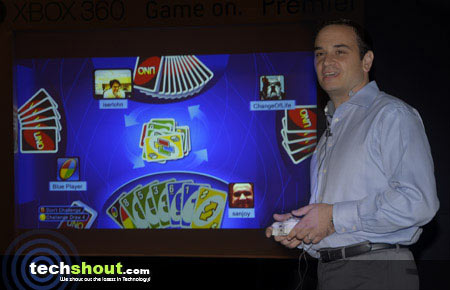 He even downloaded a game to show the effectiveness of the Xbox Live India service. And, turns out that the game happened to be everybody’s favorite casual game “UNO”.

The pricing of Xbox Live in India would be along the same lines as the international service.

During the Q&A session that was to follow, a very crucial question related to ISPs was put forward to the Microsoft heads.

In response to this, Mr. Anand said, “Potentially with some of the ISPs, with some of their programs, it could be a problem. To give you a classic example, the Sify solution that is available today, the broadband solution technically has a problem with the Xbox Live service. And that’s a fact. Because they are using a technology, which is kind of archaic. Those are tests that are currently going on. It is some thing that is not set in stone.”

He also added that Microsoft is currently in the process of discussions with a number of ISPs in India.

Well, even though Xbox Live is not yet available in India, this event turned out to be a whole lot of fun. But, we’ll still have to wait for the service to actually launch in the country. But, the best part about it all was that all those present at the event received a Gold Xbox LIVE subscription card!