With the west experiencing summer season, here is something that could make its summer more special. Xbox LIVE Arcade has announced an online “Summer of Arcade”, a line up of mind blowing games, starting from Wednesday, July 30 at 9:00 a.m. GMT (2:00 a.m. PDT), a launch of the games online for Xbox users.

Not only this, but the Summer Arcade will also bring with it an awesome lot of opportunities to win prizes that can fetch you 100,000 Microsoft Points, an Xbox 360 Elite console with many more other prizes. All that the users have to do is just earn entries by logging in and playing the trial or full versions of the ‘game of the week’ launched by Summer of Arcade, every Wednesday. 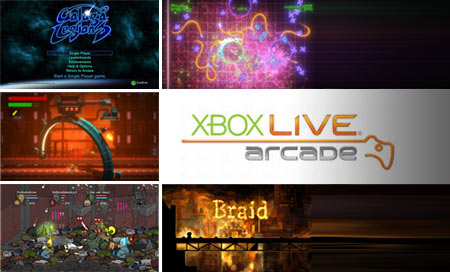 The Summer of Arcade will be bringing in 5 hot games that include E rated “Geometry Wars: Retro Evolved 2” which will be featuring even more intense action with six new gameplay modes, new enemies, scoring strategies and a big list of ‘Achievements’. The game is available for 800 Microsoft Points, on July 30.

Another game that is enlisted Summer Arcade’s line up of games is Jonathan Blow “Braid”, rated as E10+ for Everyone 10+ by the ESRB, launching on August 6. The game is a “mind-bending” and artistic puzzle-platformer allowing players to maneuver flow of time in unexpected and different ways.

August 13 will see the launch of “Bionic Commando: Rearmed”, with all new HD- graphics and 2D gaming experience. It has been rated as M for Mature by the ESRB.

“Galaga Legions” will be launched on August 20 bringing you the classic arcade shooter. The game has some cool “table-turning” dynamics and updated graphics and has been rated as E by ESRB. It has been created by the developers of “PAC-MAN Championship Edition” from Namco Bandai Games.

Last but not the least is “Castle Crashers” launching on August 27. The teens are sure to enjoy the adventurous game that features hand-drawn characters and an assortment of weapons that can help players fight to save the princess and the kingdom. It has been rated as T for Teens by ESRB.

Players can get an entry into both weekly and Grand Prize drawing by playing the trial or full version of the games. The drawings are:

The games will be made available worldwide, except for “Bionic Commando Rearmed” which will not be available in Korea.

Only legal residents of Canada, France, Germany, United Kingdom and the 50 United States or District of Columbia 17+ are eligible for The “Summer of Arcade” sweepstakes and purchase is not mandatory. Canadian residents will require skill testing question. September 2, 2008 is the last day of the game.