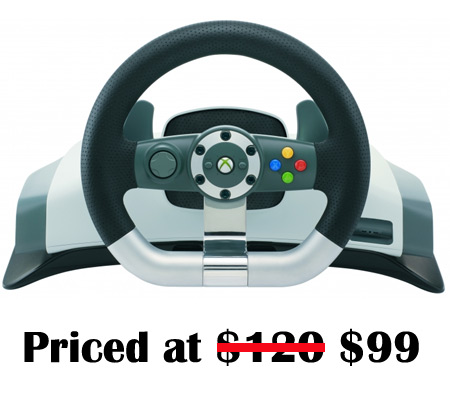 If you were falling around $30 short on your Christmas plans of buying an Xbox 360 Wireless Racing Wheel, then here’s some great news for you. Microsoft has announced that the racing wheel, originally priced at $120, will now cost $99.

Unveiled at E3 2006, the Xbox 360 Wireless Racing Wheel hit shelves in November 2006. It comes with the standard gamepad buttons along with floor-mounted accelerator and brake pedals. Even though the peripheral has the ability of running on the rechargeable battery pack, use of the force feedback and active resistance features requires an external AC adapter.

In August, following various customer complaints, Microsoft finally admitted to faulty Xbox 360 Racing Wheel and stated that it was ready to offer a retrofit. Apparently the complaints stated that a part in the wheel chassis may overheat and release smoke when the AC/DC power supply is used to recharge the Xbox 360 Wireless Racing Wheel.