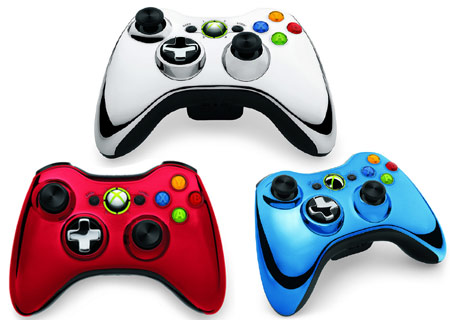 Users bored with the plain, simple and basic stock gear supplied by Microsoft with its gaming consoles could opt for the Xbox 360 Special Edition Chrome Series wireless controllers. These limited edition peripherals come drenched in a variety of shades like silver, blue as well as red and pack a price tag amounting to a little lower than $55.

To provide players with better in-game accuracy and also improved precision, these controllers are equipped with a D-pad that is said to transform from the plus design into a disc, through a simple twist. The built-in 2.4GHz wireless technology comes with a maximum range of 30 feet, giving users the added flexibility. What’s more, the company states that gamers will be able to hook up a maximum of 4 controllers to a single Xbox 360 console, at the same time.

“Today we’re announcing the Xbox 360 Special Edition Chrome Series Wireless Controllers. Available in Blue, Red and Silver these controllers also feature the transforming D-pad. The controllers will have an estimated retail price of US $54.99 each and will be available mid-May. Color availability will vary by region, so please check your local retailer for specific information,” reads a post made by Larry Hryb on the official Xbox Live’s Major Nelson blog. 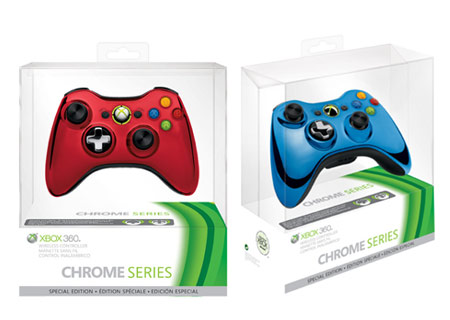 Microsoft has embedded its Xbox 360 Special Edition Chrome Series wireless controllers with an integrated headset port. Being compatible with the Xbox Live play service, users will be able to conveniently communicate with others straight through the peripheral. And for longevity in activity life, the vibration feedback can be adjusted to players’ preferences for conserving battery. Also, the Xbox 360 Guide button is said to provide quick access to games and media as well as the ability to power the console on or off.

The Xbox 360 Special Edition Chrome Series wireless controllers price sums up to $54.99. Dressed in limited edition hues, these units will be available exclusively through select retailers starting from mid-May 2012.