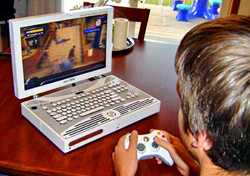 The super computer modder even made an custom aluminum case and also added a water cooling system to keep the system running smoothly.

The Xbox 360 laptop weighs only 14 pounds thats just twice as heavy as the actual Xbox 360.

On what made him build this unique mod Ben said, “A friend of mine asked back in May ‘Can you build an Xbox 360 laptop’ And I responded ‘Sure, can you pay for it?’ He agreed, and thus I set forth on what was surely to be my most complex and insanely ridiculous videogame project yet. “