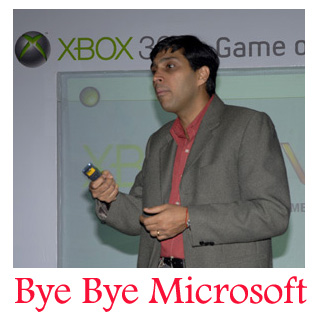 Mohit Anand, the Country Manager, Microsoft Entertainment & Devices Division, Microsoft India has bid adieu to the company. And this isn’t any rumor, but is cent percent true news.

Mohit himself has officially acknowledged that he has put down his papers at Microsoft India and post a notice period of 6 weeks, which ends by 15th April. Anand said that he may be leaving the company but he is absolutely determined to remain in India and pursue his dreams.

Negating any kind of animosity, hostility or internal issues as the reason behind his departure from the company, Anand now states that in his 8-years tryst with Microsoft India, where he held the senior most position in the Entertainment and Devices division, he has formed some associations that are sure to last for life. His move from the company, as per him, is purely due to choice and has not got any internal spat etc as the cause for his exit.

Microsoft India’s Xbox 360 poster boy – Anand played a key role during the India launch of the Microsoft’s Xbox 360 gaming console and also during the subsequent game title releases in the country. It’s not officially known as of now as to who would be filling into Anand’s shoes which indeed are quite big.

Anand also said that he would make a formal announcement soon on what he intends to do next and the arrangement that he has reached with the new company he will be joining.

Whether Anand’s departure will leave a vacuum or not at Microsoft India, only time will tell.