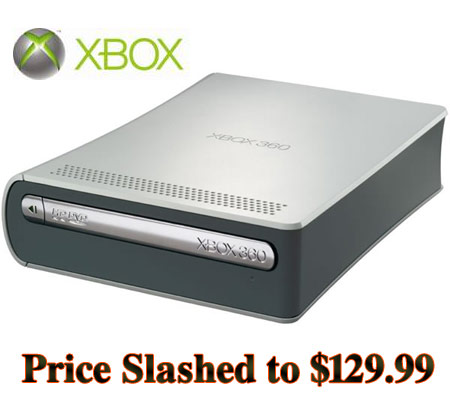 Believe it or not, prices of the Xbox 360 HD DVD Player have slashed from a whooping $179.99 to $129.99, from Microsoft’s end itself. This means that the system is now $50 cheaper. This kind of a discount was being offered by retailers in the past, but now it comes officially from Microsoft.

Though Japan will be getting a cheaper Xbox 360 version soon, it isn’t lucky enough to avail of the $129.99 Xbox 360 HD DVD Players. As of now only US, Canada, Australia and New Zealand residents can enjoy the new prices.

So in short, you get the official Microsoft Xbox 360 HD DVD player bundled with 5 free HD DVDs, which can be regarded as quite a steal.

This exciting piece of news was revealed by Xbox spokes Major Nelson via his weblog.

One of the reasons that could be behind Microsoft making such a move would be its effort to push HD DVD player sales to get a larger installed user base to contend with the Blu-ray format, which is an outright winner thanks to the Blu-ray player’s incorporation in Sony’s PS3. However Microsoft states that they are not restricted to the HD DVD format and may support Blu-Ray in the future.

All the same Microsoft also insists that the price drop is not to clear out the present stock, but is rather a response to the consumer demand as experienced during Q4 of 2007.