Creative Zen X-Fi2 Review: Shows off its music and touch-ability 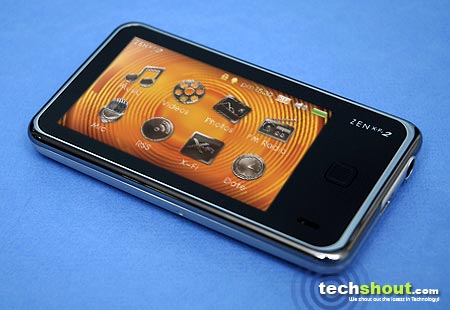 Keeping up with the touch mania across the tech realm, the all new Creative Zen X-Fi2 puts together, touch ability, FM Radio and flavors of 8GB, 16GB and 32GB. Read our review to dig in further into its specs and overall performance. You may like it or not, Apple’s iPod Touch has been the reigning contender in the portable audio arena. In fact, spurting out new generation of devices, Apple is known to enhance the previous versions to a great extent. To bring in competition to the iPod Touch, Creative put to fore the X-Fi2, under its esteemed Zen range. The original X-Fi had it all, apart from the touch functionality.

The Creative Zen X-Fi2 hopped out of the packaging box along with EP-630 earphones with small, medium and large eartips, a USB cable and a user guide. On opening the package, the inclusion of the EP-630 earphones came in as a pleasing sight. However, the length of the USB cable makes us wonder what could possibly make Creative cut short them to an extent that the device dangles onto ports. The pop-up style extremely-short-lengthened USB cable attached to Vado HDs is understandable but the X-Fi2 sure asks for at least moderate length.

With the design, Creative sticks to roots of classic simplicity. Well, the black device with chrome edges and matte silver back does exude a sophisticated look. The device is extremely light and one could easily slip it into pockets and hand purses. The lightweight is owing to the plastic silver matte backflap. However, we feel it would be classier with a black or chrome rear (but one may have to compromise on weight). The overall built quality seems good as well.

We received an 8GB unit with its front face dominated by the screen and a single square button (the design surely reminds us of the Apple product). The speakers are also embedded on the front surface. The top edge features a slot for memory card alongside microphone and power button. A standard 3.5mm jack and a mini USB connector are outfitted on the right edge.

Moving to the interface, the menu has been divided into two screens. At a glance it looked neat without much ado, exhibiting simple, huge icons that denote the features it incorporates. However, on using the device, the navigational experience wasn’t smooth. Camouflaged within the simplicity was its sluggish navigation and annoying resistive touchscreen. This reminds us of the proverb ‘never judge a book by its cover,’ which clearly relates to the interface of this device.

On the other hand, those who dislike hassles of iTunes would appreciate the simple procedure of adding music, videos and other content to the device. It has been made possible by a simple drag and drop process. Furthermore, the Creative Zen X-Fi2 also serves as a storage solution, capable of carrying your other data. It’s like attaching a pen drive which on opening has been segregated into sections like Music, Videos, Pictures, Applications, RSS, Starter Pack, Imported Files, Playlist and My Organiser.

As a music player, the X-Fi2 could be termed highly efficient. The audio quality is good and the bundled earphones enhance the listening experience even on the go. We could also skim through our fond pictures with music playing in the background. The loudspeaker option was average. Moreover, while using the loudspeaker mode, we weren’t quite happy about the audibility levels. Even moderate speaking tones could overpower the volume levels of the device. So, if you plan to spend a fun-filled rhythmic evening with friends then don’t go too chatty as it could completely kill the volume levels of the tunes.

Using audio settings, we could change the play mode to repeat a track, Shuffle tracks and more. Equalizer and Bass Boost further helped enhance our listening experience. We could also make changes to the volume and loudspeaker. A dedicated X-Fi Menu icon with Crystallizer and Expand pre-installed in the X-Fi2 didn’t prove to be all that beneficial. 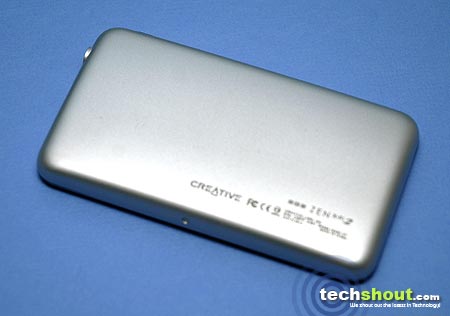 While testing the Creative Zen X-Fi2 for its video playing capabilities, we loaded it with some of our favorite videos. Well, we won’t fuss over the screen size considering it as an on-the-go device. However, the clarity didn’t stun us either. The video quality was average as we watched some AVI and XviD video files. Some file formats supported include WMV9, MPEG4-SP3, DivX3 4/5 and XviD3. Those accustomed to sharper and larger images, should know that the device isn’t an HDTV or home entertainment system and remember the moolah (comparatively very less) you are spending on it. Although, we agree that Creative could have done a better job at this as well.

We also stuffed this media player with images, and the experience was flawless. It did manage to handle the images pretty well. The zoom capability worked well too. In addition, the integrated accelerometer helped view images horizontally and vertically by tilting the device. While browsing through our favorite photos we couldn’t help our desire to groove to a little louder music, but to our astonishment the device didn’t exhibit physical volume controls. In fact, one can’t adjust the volume without entering the Play Now screen. This has come across as a major let down in the device functionality. The microSD card slot let us add more content. Be it photos, videos or other content, the data from the card is stored separately in the microSD section of the device which is an icon on the screen.

The FM radio worked quite fine. Nevertheless, the interface could have been better. A tap on the Auto option and the stations were instantly preset into a single list. We could also change stations by sliding our finger across the screen. Besides, it includes manual station presets, loudspeaker options and name/delete presets.

We recorded a few clips with the recorder functionality which came across moderate. The Menu also displays a clock with the hands ticking, so you could just peep into to know the exact time and date. The utilities like Calendar, Contacts and Tasks further add to the convenience. Our unit also came pre-installed with Sudoku that helped us wile away time in our traffic struck ride back home. The power saving ability let us choose the backlight time (5, 10, 15, 30 or 180 seconds) along with idle shutdown time and sleep timer. The brightness can be tweaked while it let us choose from a few simple themes as well.

Another notable aspect is its battery life. Impressively, it turned out to be an ideal on-the-go device w.r.t. power-capabilities which let us listen to tunes for almost a day. We could stretch our continuous video-watching sessions to about four hours.

The audio quality is the foremost notable factor that could turn into the selling point of this Creative device.

Enhancing the audio quality further is the inclusion of the EP-630 earphones.

The support for FLAC is appreciable.

Dedicated music buttons is something one would look for in a device that emits music or videos. Surprisingly, the Creative X-Fi2 doesn’t come with any.

We couldn’t adjust the volume while not into the Play Now screen. The on-screen volume controls weren’t smooth either.

The overall response including the touchscreen is sluggish.

To sum up briefly, Creative Zen X-Fi2 is good at delivering music but leaves room for improvement with other aspects. Though audio quality is good, the overall touchscreen and navigational performance of the device is dull. It is nowhere close to the iPod Touch. Creative’s this attempt at the price point offered is appreciated but the package has failed to deliver the expected performance efficiency. The X-Fi2 gets a rating of 7 out of 10 from us. It can be picked with 8GB storage space at Rs. 8,999, 16GB at Rs. 11,999 and 32GB at 14,999.