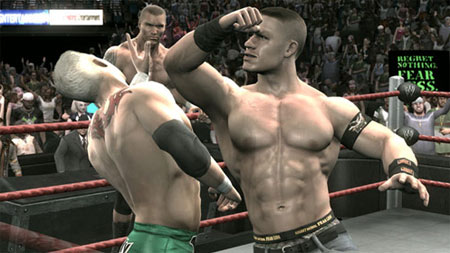 Fans of the World Wrestling Entertainment franchise will really be rejoicing on hearing this great news.

“With dynamic new features and the extension of our gameplay experience through downloadable content, WWE SmackDown vs. Raw 2009 will bring more console, handheld and wireless gamers together with to enjoy the virtual world of WWE,” added Aniello.

WWE SmackDown vs. Raw 2009 is expected to offer gamers a brand new tag team experience which will enable them to build momentum and attributes, eliminate opponents with high impact double teams and finishers as well as get the “hot tag” for the final win.

Other salient features of WWE SmackDown vs. Raw 2009 include:

Further, the Wii version of WWE SmackDown vs. Raw 2009 will include a wide variety of new weapons as well as the debut of online gameplay.

The Nintendo DS version will make good use of the handheld’s stylus and D-pad, delivering a compelling handheld fighting game experience. Plus, the redesigned Season Mode takes a role-playing approach which allows players to interact with Superstars, upgrade their abilities and complete missions on a quest to meet their goals.

You can expect WWE SmackDown vs. Raw 2009 to hit stores in this fall.