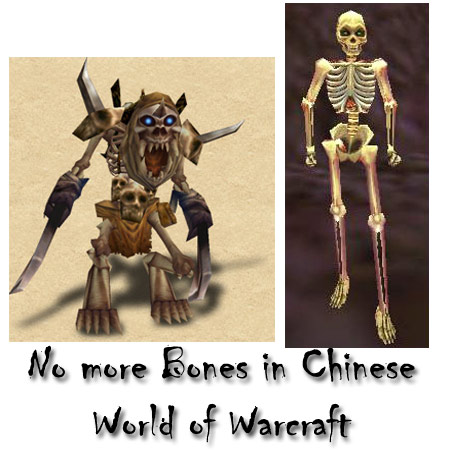 Bones and skeletons have now officially disappeared from the Chinese version of the hugely popular online fantasy game, World of Warcraft.

In fact, Chinese gamers had to wait half a year longer than the Americans for the upgraded version of the monster-slaying PC game. However, in this latest version of the game, they found that the figures of the familiar skeletal characters were covered with flesh.

According to Zhao Yurun, public relations director of The9, which runs WoW in China, the changes in the Chinese version of WoW was part of an “operational Strategy”.

“The company updates the game seven to eight times a year, adding patches that require no government approval to the original version,” Yurun explained.

In this upgraded Chinese version of World of Warcraft, the skeletons have flesh and the bones that otherwise symbolize dead characters have been changed to graves.

But, the Chinese are not very happy about this. Over 500 gamers in china have signed a post vowing to boycott the game.

Some Chinese gamers have even set up a ‘Save the Bones’ campaign on bbs.ngacn.com, a web site especially for WoW players in China.

Meanwhile, others have already begun programming a patch that allows them to alter game models to see skeletons and bones on their screens once again.

Of late, China has urged Internet companies to clean up Web sites and offer only legal and “healthy” content. This move was probably made in the same effort.