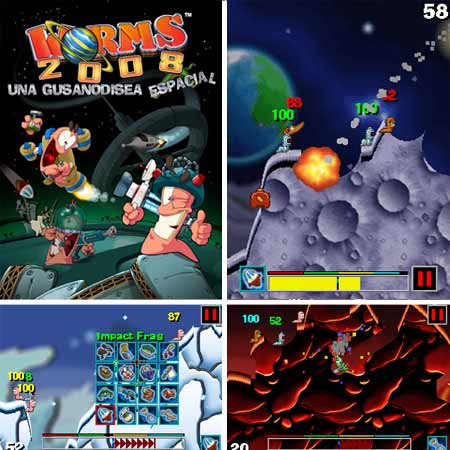 THQ Wireless and Team17 Software have announced the Worms 2008 A Space Oddity game for mobile handsets. The new Worms 2008 will showcase a whole raft of new gameplay features including four all-new mini-games. The new features of the game include an enhanced single player campaign mode, an all-new landscape view mode and new loopy weapons.

Players will be able to see the main game in landscape mode and also in portrait mode.

Worm 2008 includes a story of intergalactic Worm travelers exploring their solar system. The mission of the single-player campaign features varying objectives to keep the player on their toes while fighting to defend installations, repair space crafts, collect rare minerals and battle to the death against alien races.

Space settings come along with a host of new weapons such as Impact Frag, Atom Packs and Cluster Frags. These weapons are based around the classic Worms weapons but share all new artwork and names with Worms: A Space Oddity, which was released for the Wii.

Moreover, while multi-layered parallax particles enhance the depth of field effect and have direct impact from gameplay, reacting to the direction and strength of the wind. While, graphical effects like smoke trails help to bring shots to life.