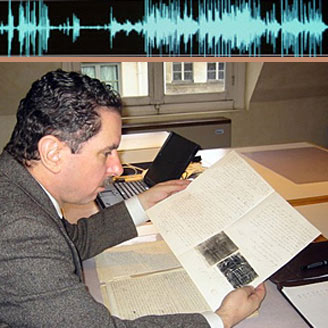 March 28, 2008 was a very special day for audio enthusiasts, musicologists, scientists and audiophiles because on this very day the world’s earliest sound recording was played back for all present to hear.

The voice of an unknown woman signing in a laboratory in Paris around 150 years ago was brought back to life at a recital hall in Stanford University. It was a French soprano singing “Au Clair de la Lune”, and as expected it sounded a bit warbled.

The world’s earlier audio recording was originally etched on soot-blackened paper by a Parisian typesetter named Édouard-Léon Scott de Martinville, more commonly known as Monsieur Scott by the French. This graphic work was created precisely on April 9, 1860 and is the first known recording of sound.

He had invented a device known as the “Phonautograph”, but he perhaps never thought that these faint traces of sound waves could ever be transformed into sound!

This recording was discovered in February at the archives of the French Academy of Sciences in Paris by First Sounds, an informal association of audio historians, recording engineers, sound archivists, scientists and others who aim to make mankind’s earliest sound recordings available to all people for all time. The warbled soprano sounds were restored by physicists at the Lawrence National Laboratory.

According to audio historian David Giovannoni who was present at the Stanford recital hall, “It’s ghostly, it’s magic! This voice is a young woman trying to come into the 21st century to sing for us.”

He also said that Monsieur Scott meant to preserve in graphics form the great music and “declamations” of the day in a form that could be read like writing far away in the future, which is now the present for us!

Patrick Feaster, a historian with First Sounds says that this is a significant discovery for many reasons.

“We already knew that Leon Scott had invented sound recording but he just had never got to the stage of playing back his recording,” Feaster said.

The voice singing the world’s first recording is believed to be Monsieur Scott’s daughter.