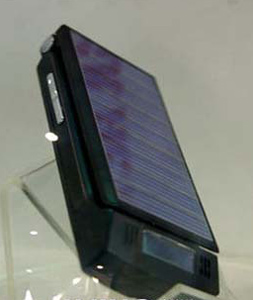 Hi-Tech Wealth, a well known telecommunication products supplier in China has developed a mobile phone that utilizes solar energy to recharge itself. The company also claims that it is the world’s first to use solar power to recharge a phone battery.

According to the company, a scale-like solar panel on the top side of the clamshell-designed phone can also be recharged by light from other sources including candles.

This solar-powered mobile phone from Hi-Tech can provide 40 minutes of talk-time after sitting in the sun for an hour.

Many companies around the world are working on similar mobile phones, but their products are still in the experimental stage, said a company official.

Hi-Tech has said that it has developed the most advanced solar power technology and now owns eight patents and has even applied for others.

According to Zhang Zhengyu, chairman, Hi-Tech Wealth, “With more than 400 million mobile phones in the country, China would save a great amount of electricity if all its mobile phones were recharged by light.”

Zhengyu also claimed that the lifespan of the battery in the newly developed solar-powered mobile phone is 2.5 times longer than that of traditional batteries.

Hi-Tech Wealth plans to introduce six of its light energy mobile phones in the market this year, and another 30 next come.

However, the cost of this mobile phone that is powered by the sun has not been disclosed as yet.