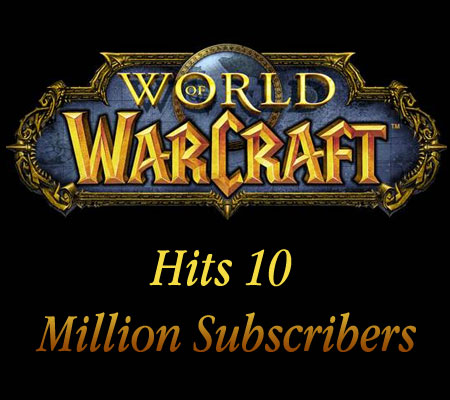 Out of the 10M subscribers, 5.5M are hosted in Asia, over 2M in Europe and more than 2.5M in North America. These figures include all users who have paid a subscription fee, own an active prepaid card or are in their first free month of access. However this count does not include free promotional subscriptions, expired or canceled subscriptions or prepaid cards.

Mike Morhaime is the CEO and cofounder of Irvine, Calif.-based Blizzard. An ecstatic Morhaime said, “It’s very gratifying to see gamers around the world continuing to show such enthusiasm and support for World of Warcraft.”

Inviting more users, he said, “We’re always pleased to welcome new players to the game, and we’re looking forward to sharing the next major content update with the entire community in the months ahead.”

Launched on November 23, 2004, WoW’s expansion, The Burning Crusade has the distinction of being the best-selling PC game of 2007 in N. America and Europe and boasts of being the fastest-selling PC game of all time, selling almost 2.4 million copies in its first 24 hours and about 3.5 million in its first month. The MMORPG achieved the 9M mark figure in July, last year.

Wrath of the Lich Ling is the second expansion that WoW aficionados are now anticipating.

Currently, the title is available in seven languages. A Russian version of WoW is currently in development and is slated to be released sometime later this year.