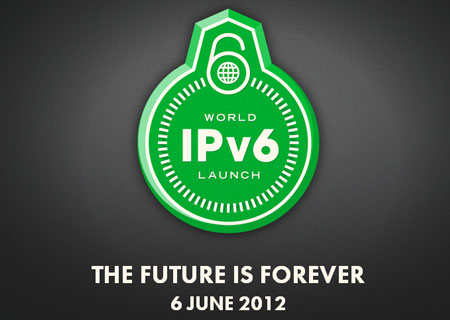 With IPv4 officially running out of addresses, World IPv6 Launch Day seems to mark a new beginning for a number of domains around the world. By June 6, 2012, many web companies, manufacturers and ISPs are expected to enable IPv6 as default over their products and services.

Unlike fossil fuels, the world seems to have an alternative for the depleting protocol system present for 15 years now. Building on the World IPv6 Day event held back on June 8, 2011, the implementation of this successor to previously used protocols is said to be permanent and critical for the continued expansion of the internet as it brings in performance improvements.

“The fact that leading companies across several industries are making significant commitments to participate in World IPv6 Launch is yet another indication that IPv6 is no longer a lab experiment; it’s here and is an important next step in the Internet’s evolution,” commented Leslie Daigle, the Internet Society’s Chief Internet Technology Officer. “And, as there are more IPv6 services, it becomes increasingly important for companies to accelerate their own deployment plans.”

ISPs participating in the launch of the new protocols include AT&T, Comcast, Free Telecom, Internode, KDDI, Time Warner Cable and XS4ALL. They are followed by equipment manufacturers such as Cisco and D-Link as well as web companies like Facebook, Google, Microsoft Bing, and Yahoo. Besides these, network providers, Akamai and Limelight, will also be permanently enabling IPv6 over their infrastructure.

World IPv6 Launch Day is scheduled to take place on June 6, 2012. This date marks the worldwide adoption of next generation internet protocols that are most likely to provide over ‘340 trillion, trillion, trillion’ addresses, compared to the 4 billion allocations from IPv4.