Wondering how much the iPhone 5S, 5C will cost in India? We’ve got prices

Apple announced the iPhone 5S and iPhone 5C in the US a few days back and while there’s no word on when either device will make it to India, we’ve got what appears to the possible prices for both smartphones. So far, an online retailer has only listed the handsets on its website with a coming soon label, but with a little snooping around, we’ve managed to stumble upon a few interesting details.

Hidden within the source code of the iPhone 5S and 5C listings on Saholic are possible launch prices of the devices. As per what we see, the 16GB 5C will retail for Rs 30,000, while the 32GB model is expected to sell for Rs 35,500. Coming to the flagship, the smartphone should go for Rs 52,900 upon release for 16GB of memory and the 32GB variant is pegged at Rs 55,000. And to get hold of the higher capacity 64GB option, you may have to shell out a little under Rs 60,000 (Rs 59,500 to be precise). The latest flagship is as costly as the Asus PadFone which includes the smartphone and a tablet dock. 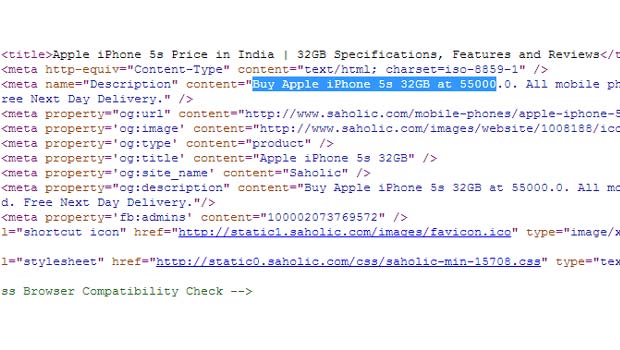 The iPhone 5S is an upgraded version of its predecessor. It features the same 7.6mm thick form factor and even weighs the same at 112 grams. What’s changed here is that the home button sports a fingerprint sensor, the processor has been upgraded to the A7 and the camera has been much improved for better quality images. The 5C is the cheaper alternative to the flagship with specifications similar to that of the previous generation model.

The prices mentioned above for the iPhone 5S and 5C look to be the real deal. So if they’re way over your expectations, you might want to wait a bit longer until we get a confirmation on the retail tags before disappointment sets in. Until then, check out why we feel Apple should reduce its iPhone prices in India by clicking here.

Facebook
Twitter
Pinterest
Linkedin
ReddIt
Tumblr
Flip
Previous article
NTT DoCoMo set to stir up storm in Japan by embracing iPhone 5S and 5C
Next article
Infinity Blade 3 is a launch game for the iPhone 5S, what to expect?