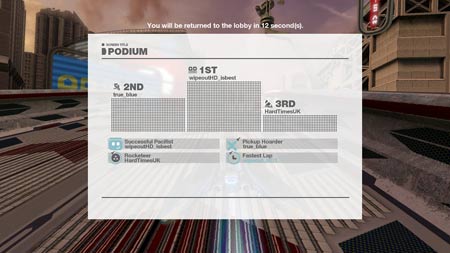 Sony is releasing the free V1.30 update for WipEout HD, the racer game from the Wipeout HD franchise, via the PlayStation Network.

The update brings in a range of new multiplayer features like online ranking, podium screen and online badges and more.

There are now over 50 ranks to progress through for the players. The newly featuring podium screen will exhibit the three finishers of each online race or tournament.

And if you are not one of the Top Three who get a chance to show up on the podium, you still definitely get an online badge depending on your performance. There are in all 33 badges.

Also, Sony has introduced game invites in the DLC to allow players to invite their friend to join the games and also remain updated on who is active on the online game so that you can join the game.

There is also the spectator mode in which you can see the game progress if you join in the race after it has already started. After the race finishes, you can join the fresh new race as you are directed to the lobby with other players.

Additional options in the game include – HUD Weapon Hints on/off, options to create a Public, friends-only or invite-only game, barrel rolls on/off and options for the number of laps (maximum 20).