WinMerge alternatives mentioned below are your options in case you wish to try out other differencing and merging tools. As the name suggests, the program is meant for the Windows environment, but users who are looking for similar software for Mac OS X and Linux platforms will also find substitutes in our lineup. The flexible editor in question has been loaded with some necessary features like syntax highlighting, line numbers and word wrap to name a few. Its highlighting functions have proved to be of help to coders for a long time. And applications that we have here also boast of most of these attributes. Read on to know more about them.

Meld, a visual diff and merge tool assists developers with the task of comparing various files and even pledges support to some of the popular version control systems. You can expect two- and three-way comparison between files and directories and even review your code changes. There’s auto-merge mode and the comparisons are updated as soon as you modify your text. Another advantage of the program is that it allows you to navigate easily between your comparisons and conflicts. 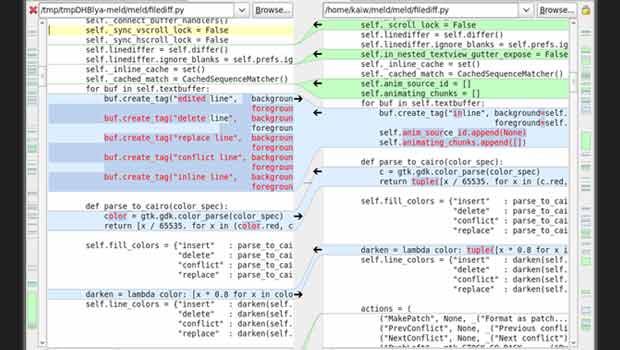 Syntax highlighting can be found in the software and it even lets you ignore uninteresting differences using the built-in regex text filter. And there’s no need to install Meld on your computer, you can simply extract the archive and run it in your system’s bin folder. It can be downloaded for free. 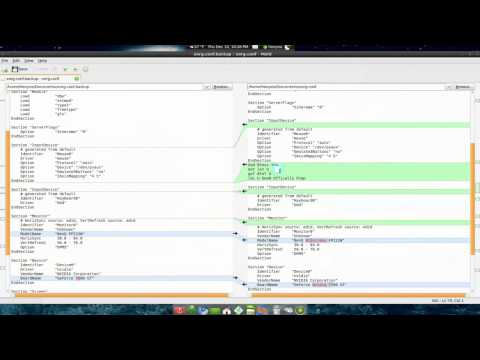 This option on our compilation of programs like WinMerge boasts of being a quick and easy way of comparing files and folders. It lets you focus on the differences you are interested in and ignore all the others. And once you are done comparing the files, merge all the changes you made and synchronize them without any hassle. Generating reports is also possible and is hardly a difficult task. 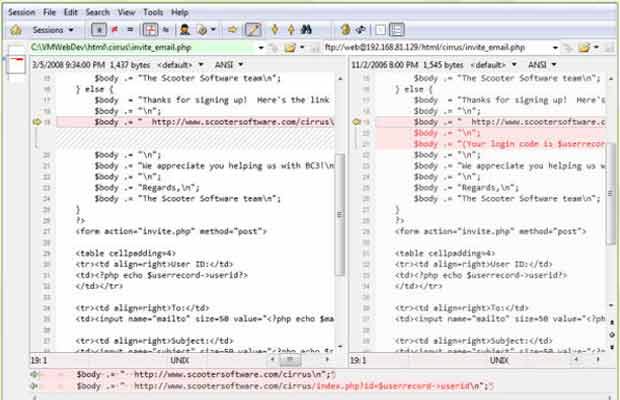 The application claims to be really fast and compares drives and folders at high speeds. You can choose to simply check file sizes or carry out thorough byte-by-byte comparisons. Its attributes include syntax highlighting and you can also utilize it to compare Word and PDF documents. The tool is compatible with Windows and Linux platforms. 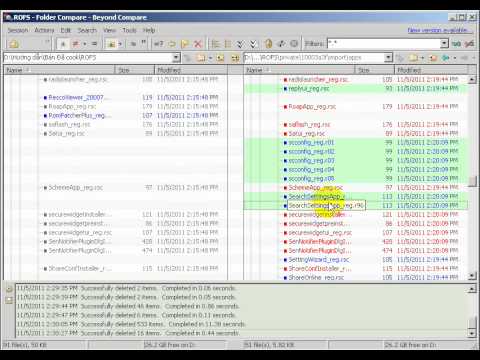 KDiff3 is a merge program that works with Unix, Windows as well as Mac OS X platforms. It can compare or merge two or three text input files and directories and you choose to see the differences line by line or character by character. The utility has an automatic merge-facility function and an integrated editor has been thrown into the mix as well for solving merge conflicts.

Complete with an intuitive graphical user interface, it facilitates manual alignment of lines, has the word wrap feature and merges version control history automatically. And it should be noted that this is an open source software. 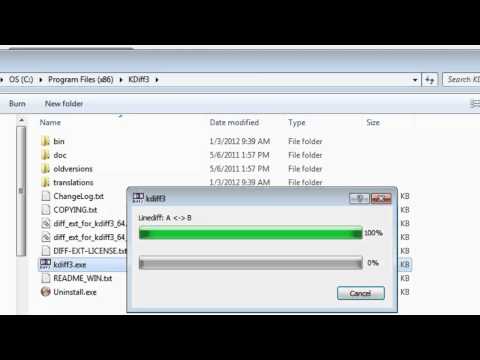 Taking our roundup of applications similar to WinMerge further is xxdiff, a graphical file and directories comparator that lets you merge documents. As it has acquired the GNU GPL license, you can download it without shelling out even a single penny. The program can be utilized for the purpose of comparing either two files, three files or two directories and offers horizontal highlighting for the differences. 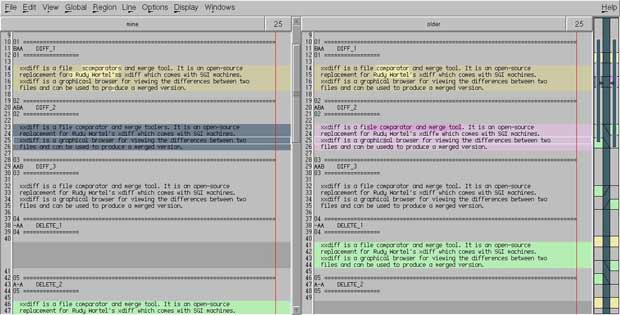 It also helps you with the task of performing merge reviews and can collaborate with external diff software for computing differences.

Up next is DiffMerge, a program that claims to be loaded with tools that make it all the more easy for you to compare, merge and sync your files. It highlights all your differences in various shades and comes up with a report in HTML. You can simply drag and drop files or folders and customize the colors and fonts according to your preferences. 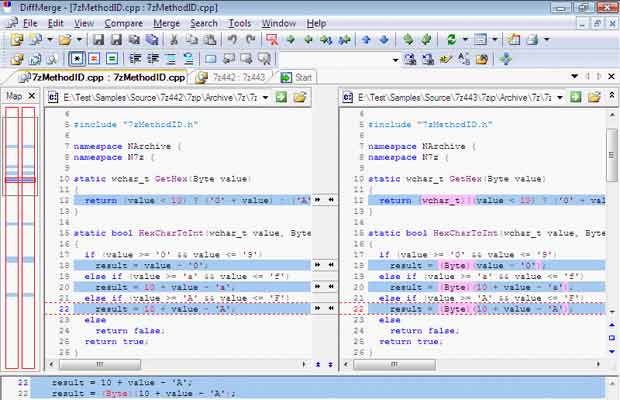 Its comparison methods for files include last modified time and date, size, attributes, versions, CRC and more. You can even compare the contents byte-by-byte or by text. It boasts of fully customizable file extension filters and lets you ignore differences that you think are not important. Like all the other applications mentioned here, it too features syntax highlighting.

The utility that takes this spot on our catalog of programs like WinMerge is available in English and Japanese for computer systems running either Windows or Mac OS X. You can choose between the standard and professional versions of Araxis Merge based on whether you want two-way comparison and merging or three-way. 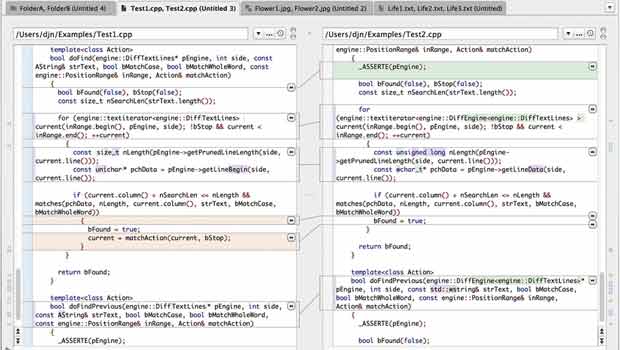 Features that are found in both of its versions include syntax highlighting, binary and image file comparison, point-and-click editing, word wrap, automatic merging and many more. Trial editions of the software are available for download through the official website.

And the last utility that has managed to make it to our list is ExamDiff Pro, a powerful and intuitive visual file and directory comparison tool meant for the Windows environment. According to the developers of this program, it has a more efficient and user-friendly approach of comparing files and folders. It goes without saying that you can compare text and binary files as well as directories. 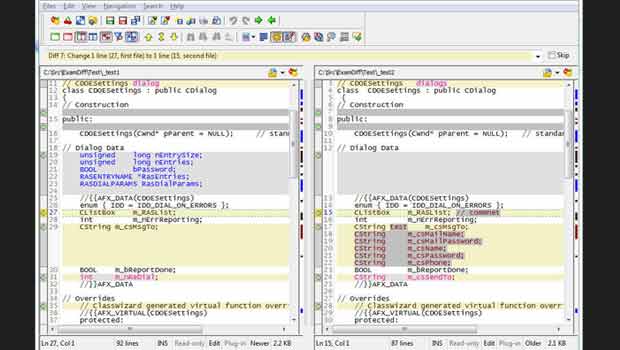 This has support for three-way diff and merge and it points out differences between lines, words or even characters. Essential features like syntax highlighting and word wrapping have also been thrown into the mix. It will cost you $34.99.

So these are just some of the multiple efficient WinMerge alternatives available for comparing and merging text files. You can head over to the official websites of each of the programs to compare their features and decide which one suits your needs the best. And when you have made up your mind, do get back to us and drop in a line to let us know about your opinions regarding them.