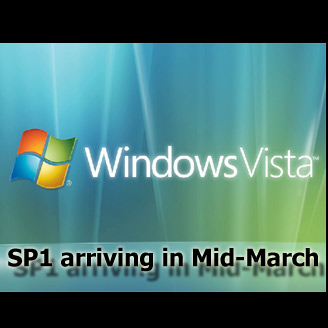 A while ago, we had reported that Microsoft’s Windows Vista SP1 would be available in early 2008. Then, came in news confirming this when Microsoft said that it had released the SP1 Beta to a small group of testers. Now, the software giant has confirmed the release of the Service Pack 1 for Windows Vista to manufacturing (RTM).

As of now, the first big package for the Redmond-based company’s flagship Windows Vista operating system has been completed in five languages namely English, French, Spanish, German and Japanese.

Further, Microsoft has said that the Windows Vista Service Pack 1 will fix a number of issues that the operating system was facing, such as performance, reliability and compatibility.

For the first major update to Vista, developers had relied on information received from customers themselves via the Customer Experience Improvement Program, Online Crash Analysis and Windows Error Reporting.

Microsoft’s Windows Vista SP1 will be available in March 2008. However, it will first be available to business customers with volume licensing deals.

The general consumers will get access to Windows Vista SP1 only though an online Windows Update service that will be released in mid-March 2008. The update will be delivered automatically to Vista users come April 2008. It is also known that Vista SP1 in other languages besides English would be released in April as well.