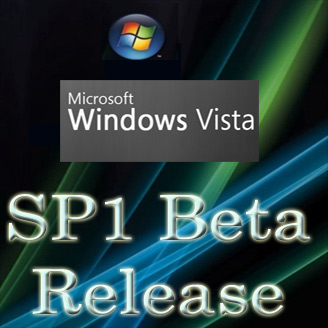 Sometime ago, we had reported about the possible release of Vista SP1 by early 2008. In the latest update yesterday, sources at Microsoft confirmed that the first beta test edition of Service Pack 1 (SP1) for its Windows Vista operating system that was first released towards the end of 2006.

However, this newly released beta version of Vista SP1 was distributed only to a select group of around 12,000 testers.

This definitely means that the general public can look forward to the actual release of the first service pack for Windows Vista sometime early next year, as reported earlier.

Already, some of the limited testers have posted details on the updates from the beta pack of Vista SP1. Here, they reported a number of improvements to the overall responsiveness of the operating system after installing this beta version.

For instance, as reported by BetaNews.com, Microsoft team blogger Brandon LeBlanc published his account of the SP1 experience saying that SP1 concentrates on making the existing features work better, rather than add new features.

Moreover, sources have reported that the Vista SP1 beta fixes some wireless networking issues as well.

Microsoft plans to deliver the Windows Vista SP1 beta version when released through their Windows Update mechanism. Besides, system administrators would have the option to install the beta version manually using a standalone version of SP1.

Now that the beta version of the Windows Vista Service Pack 1 has been released, no doubt to a limited group of testers, the rest of the world can indeed expect a much-needed fix via the final release of the Vista SP1 in early 2008.