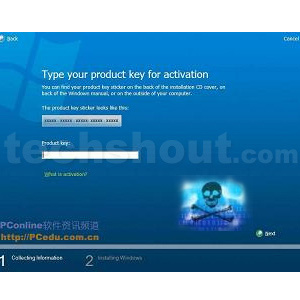 On Thursday, a website posted a tool that can apparently crack Windows Vista’s activation process by applying brute force – and lots of time – to come up with valid product keys, circumventing one of Microsoft’s most important antipiracy methods.

KezNews.com, a Windows news Web site, put up information about it along with a tool for, cranking out legal Windows Vista activation keys. But even though the tool churns through 20,000 keys an hour, it could take billions – maybe trillions – of years to work through all the possible combinations.

Microsoft said it is looking into the attack. “We’re looking into this issue now,” said Alex Kochis, senior product manager of WGA (Windows Genuine Advantage), on the group’s blog.

A “brute force” key generator that randomly tries a variety of 25-digit codes until it finds one that works is now available, according to KezNews.

As per KezNews.com’s report by someone identified as Computer User, who developed the “KeyGen” tool, the process uses a modified version of the software license manager script file to search for valid keys. Crackers, however, must from time to time check to see if the key they entered earlier has changed, then attempt to activate using the changed key. Those parts of the procedure can only be done manually.

Vista’s activation, which is part of the company’s overall anti-counterfeit program, authenticates the license’s product key – in Vista’s case, that’s a 25-character alphanumeric string – to ensure that the key isn’t used multiple times by pirates. If Vista is not activated within 30 days of its first-time use, it drops into a crippled state in which only the browser works, and then only for an hour at a time.

Computer User claimed that KeyGen can check about 20,000 keys an hour, but cautioned that it could take “hours, days” to come up with a working activation key. One wag on the KezNews forum did the math and concluded that it would take 1.35 quintillion years — that’s 1,351,869,740,791,670,000 years to be exact — for the tool to work its way through all of the possible key combinations.

Although a few on the forum claimed that they’d found a valid activation key, many more who tried KeyGen gave up in frustration. “That’s true; I tried it about five or five and a half hours and I got nothing than … I gave up; you got a very, very little chance, and it may take weeks, months and years to get a key,” wrote Black_Necro yesterday.

Microsoft’s Kochis also downplayed the threat. “Our product activation servers perform a more rigorous analysis of the keys that are sent up for activation than the local key logic does,” he said. “Producing keys that will ultimately activate is less likely than just hitting upon one that will pass the local logic.”

And he promised that genuine users would not be affected, even if a valid, in-use key was uncovered by the crack. “What would happen if a key that was hit upon was also the same key in use by a legitimate customer? Really, this would boil down to a customer service issue and we would work to make sure that our customers are taken care of.

“But if anyone does hear of a report of a legit customer being refused a product activation on a genuine key please let us know,” Kochis concluded.

In an unusual development late yesterday, Computer User posted a public apology to Microsoft on the forum for publicizing the crack. “I apologize for exposing the work-around in question … but we all know it’s highly unlikely to ever work,” wrote Computer User.

“I regret the fact that it has been leaked all over the Net, which I guess was to be expected. I simply love Windows Vista, and I happened to stumble upon this trick. I seriously believe that everyone should stop spreading this idea around and stop using the brute force KeyGen altogether because it takes away from legitimate customers.”