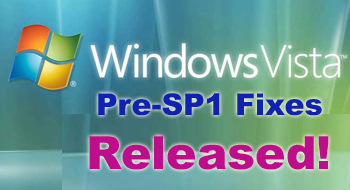 It may not be a full-fledged service pack, but at least it’s something. Microsoft has reportedly released two set of Vista fixes that have been designed to address a number of bugs. They also take care of general performance issues that obviously the company can’t wait for the official Service Pack 1 to be rolled out.

Microsoft has made these two Vista Patches available on its Windows Vista Web site, but the company has not made them available via the Windows Update process.

Each of the Vista patches must be installed individually and both require Windows validation, plus a plug-in tool if you are a Firefox user.

The Windows Vista fix promises to take care of a variety of issues, The first fix addresses a number of video driver issues, playback of high-definition content, printing issues, as well as some other random issues. The second patch takes care of screen saver bugs, video playback, general sluggishness and slowness and problems with Canon EOS cameras.

With so many problems fixed by the Windows Vista patches, it’s no wonder that Microsoft could not wait for the actual Vista SP1 to be released.

All you Vista users who have applied these two pre-SP1 patches, we’d love to hear from you (how well the patches worked)