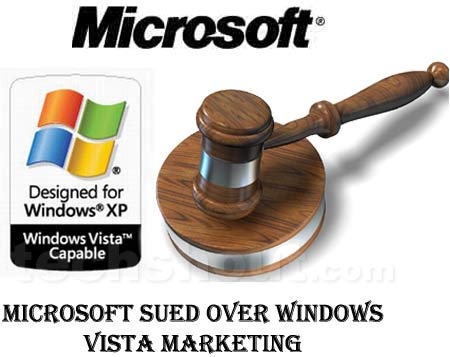 Software giant Microsoft is now being sued over their marketing practices. A lawsuit has alleged that the company has engaged in deceptive practices by letting PC makers promote their computers as “Windows Vista capable”, even though the machines were not capable of running the “signature” features of the Windows Vista operating system.

The lawsuit has been filed on behalf of PC buyer Dianne Kelley of Camano Island, in which she claims that the machines being sold in the market carrying the “Windows Vista Capable” sign are essentially only capable of running the Windows Vista Home Basic Edition which lacks support for the “Aero” interface along with many other features.

Here is what Michael Rosenberg, one of the lawyers representing Kelley in the case, had to say, “All the ‘wow’ stuff that Microsoft is selling and marketing is present in Windows Vista Home Premium, but it’s not present in Basic.”

Linda Norman, a Microsoft associate general counsel responded in a statement by saying, “We feel as a company we went beyond what we’ve ever done to try to educate people so that they understood and could make the right purchase decision.”

The company “conducted a very broad and unprecedented effort” to help PC makers, retailers and consumers “understand the hardware requirements to run the various flavors of the Windows Vista operating system,” she continued.

While Microsoft created a premium designation of Windows Vista “Premium Ready” to indicate that a machine was capable of running the operating system’s advanced features and was made available for PC makers and retailers to use in places such as computer boxes and in-store marketing materials, the distinction wasn’t made in the general “Windows Vista Capable” stickers.

The complaint further states: “In sum, Microsoft engaged in bait and switch – assuring consumers they were purchasing ‘Vista Capable’ machines when, in fact, they could obtain only a stripped-down operating system lacking the functionality and features that Microsoft advertised as ‘Vista’”. As a result, the suit said, people were buying machines that couldn’t run “the real Vista.”