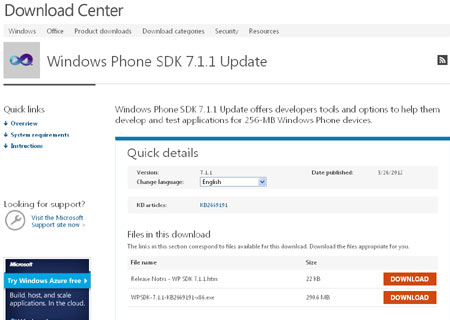 With the availability of the Windows Phone SDK 7.1.1 update, it seems that the Nokia Lumia 610 isn’t likely to stay as the only Windows Phone 7-powered handset with RAM capacity well below Microsoft’s specifications. This version is said to be the final build of the CTP release which was previously launched around a month ago.

The main highlights of the upgraded SDK include improvements that should allow developers to create apps which can perform equally well on future smartphones that are equipped with 256MB of memory. Besides this, the company has also thrown in a few enhancements that comprise of a new emulator device image for running applications on a 256MB handset, the latest version of the Microsoft Advertising SDK and better language support amongst various others.

Cliff Simpkins, Product Manager for WP7 at Microsoft, on the official Windows Phone Developer blog stated, “I’m pleased to announce that the Windows Phone SDK 7.1.1 Update is now available for your download; it’s the final version of the CTP we released last month, and enables Windows Phone developers to do two things; Develop apps that work well on the new 256 MB devices and use the WPSDK 7.1 to develop on machines running Windows 8”

Companies can run the tool on machines powered by the Windows 8 OS. However, this feature in particular will be officially supported when Microsoft rolls out the RTM build of its upcoming platform. Also, users might witness a drop in the emulator’s overall performance if the Hyper-V technology is enabled. Installing the upgrade is said to be an intuitive task and shouldn’t take more than three steps to finish.

The Windows Phone SDK 7.1.1 update is available for free through the Microsoft Download Center.