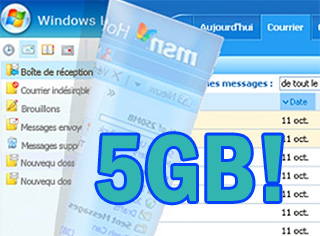 Microsoft has revved up its Windows Live Hotmail service by rolling out a number of new features to its users, the most notable of which adds increased mail storage for their webmail users.

Ellie Powers-Boyle, a program manager for Windows Live Hotmail wrote in a blog post on this new development: “Just when you were wondering how you’d ever fill up 2GB or 4GB of mail, we’ve given you more storage.”

This offering from the company definitely doubles the existing capacity offered by Hotmail which happens to be one of the most widely used services in the world.

Besides, the company has also added “vacation replies” as well as the ability to turn off the ‘Today’ screen.

Microsoft has also listened to its customers and has decided to reduce the dimension of the header in the user interface, providing users with more space for mail-previews. The company has also decided to increase the time a junk or deleted mail stays on their servers.

Other new features that are expected to be launched on Hotmail include better performance, increased mail retention, contacts de-duplication, mail forwarding for combined accounts, meeting requests and better spam filtering.

According to Microsoft, the new and updates Hotmail features will reach users gradually over the weeks to come.

It sure is great now that Microsoft has gone the same way as its rivals, and has upped the storage of its Hotmail email service