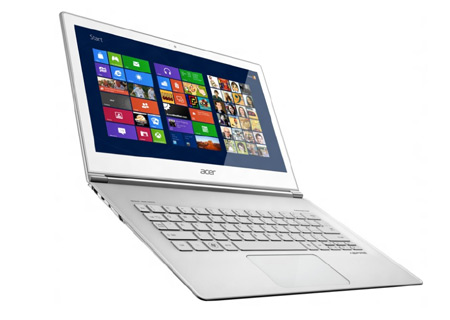 The Acer Aspire S7 Ultrabook recently went live at the Computex 2012 expo bearing a couple of highly anticipated features. While the Windows 8 OS runs the show, both 13.3-inch and 11.6-inch variants incorporate a touchscreen for making the most out of Microsoft’s latest desktop platform.

Designed around a sleek aluminum metallic unibody form factor, the 13.3-inch version is the thinnest notebook from the company, while the 11.6-inch variant is said to be the smallest. The former device is sprayed with a glossy finish flaunting a sculpted glass cover. These notebooks proffer battery life of up to 12 hours and 9 hours, respectively. What’s more, they are equipped with the Acer Twin Air cooling system and a light sensor which can automatically adjust the level of illumination on the keyboard by examining changes in light conditions.

Similar to the recently unveiled Iconia W700 and W510 tablets, Acer hasn’t provided in-depth details for this notebook. However, since it’s the next generation Ultrabook, we can safely assume that the third generation Core processor lineup powers this device. And to make things interesting, the company could have also thrown in discrete-class graphics that are based on Nvidia’s new Kepler architecture. 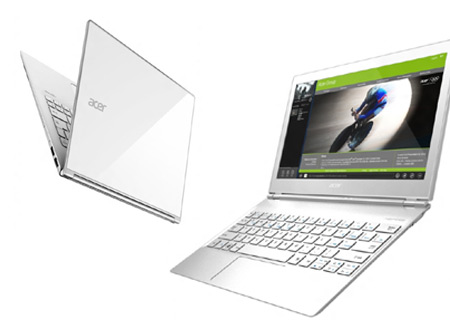 The touch-enabled Aspire S7 series is apparently only the icing on the cake. Intel has already disclosed quite a bit about the next wave of Ultrabooks. Apart from thinner designs and better battery life, the company has unveiled the existence of upcoming touch-enabled systems and the new convertible form factors, which are expected to surface later on during 2012. From a total of 30 devices, 10 are said to have the transformable design.

The Acer Aspire S7 Ultrabook price and release date aren’t clear at this point of time.