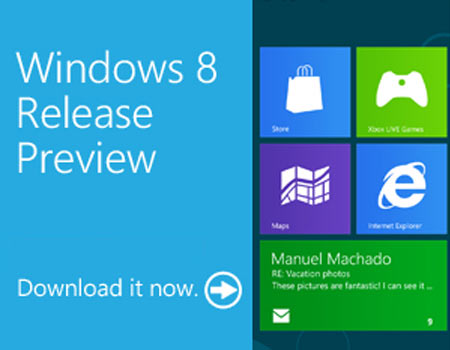 After accidentally announcing the final pre-release build of the upcoming Windows OS, Microsoft’s Windows 8 Release Preview download has now gone live. This version of the software is loaded with various new apps for accessing services such as Hotmail, SkyDrive and Messenger, the IE 10 web browser and a wide catalog of fresh entrants to the Windows Store.

According to the company, this release brings forth a number of enhancements to the platform. It proffers better personalization options and multi-monitor support. The updated list of preloaded applications that come along with the OS include Bing Travel, News and Sports. There are even gaming and music Xbox apps which are said to integrate with Zune pass.

“Today, Windows 8 Release Preview is available for download in 14 languages. This is our final pre-release, and includes Windows 8, Internet Explorer 10, new Windows 8 apps for connecting to Hotmail, SkyDrive, and Messenger (and many more), and hundreds of new and updated apps in the Windows Store. Since our first preview release last September, millions of people now use the pre-release product on a daily basis and millions more have been taking it through its paces, totaling hundreds of millions of hours of testing,” commented Steven Sinofsky, president of the Windows and Windows Live Division at Microsoft through the official Building Windows 8 blog.

The new Internet Explorer 10 browser sports a more intuitive experience bearing a touch-friendly UI and power-optimized Adobe Flash Player which is integrated into the application. What’s more, eligible Windows 7 PC purchases will be entitled to a promotional offer that allows users to upgrade to Windows 8 Pro for around $14.99. This scheme is expected to go live starting tomorrow and it will be in effect through January.