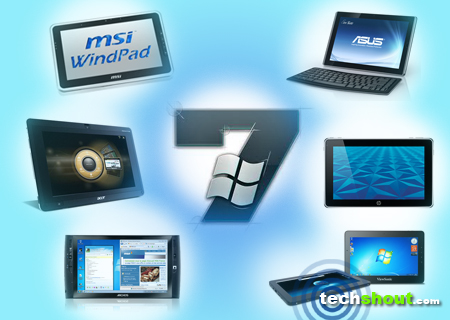 Since Android and iOS aren’t the only ones to make their mark on slates, our 6 best Windows 7 tablets roster is not only going to list out some alternatives, but it will also unfold those little extras that developers have added in to give competitors a run for their money. Before we move on, here are some of the possible reasons behind the comparably lower visibility of Windows-based tablets. For starts, it’s no hidden fact that Microsoft’s OS lacks support for ARM-based chipsets. So unlike most other gadgets, manufacturers would have to embed different hardware components, only to get the OS up and running. But let’s stick to the positive side here, as there are a lot of beneficial offerings too. You’ve got an entire desktop experience and the freedom to do a lot more than on other tablets. What else could you ask for?

First to cruise down the Windows 7 tablets speedway is the Acer Iconia Tab W500. There’s no doubt that Microsoft’s OS isn’t mobile optimized. But, that has not stopped the manufacturer of this device from bringing in a little something of its own. Through its Acer Ring UI, the company seems to have put in a lot of efforts for providing a smooth interface that allows you to conveniently browse and run touch-friendly applications as well as utilities. Well that’s not all. This device is basically marketed as a portable entertainment rig. And to keep up to that title, there’s a 10.1-inch HD multi-touch display, Wi-Fi b/g/n standards and all the feature Windows 7 has to offer. 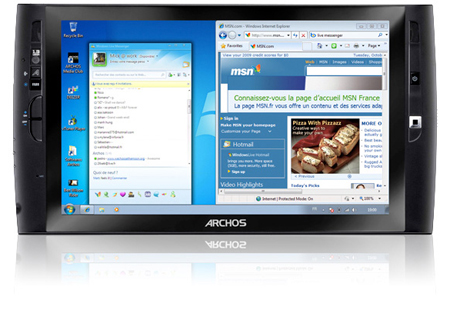 Not well accustomed to touch displays? Well then, our next addition to the choicest Windows 7 tablet catalog might just have something to help you move around more efficiently. The Archos 9 PC tablet comes with a trackpoint component which allows you to navigate in and out of menus with your finger. Additionally, the design is more user-convenience oriented. The device’s front possesses a host of options through which you can activate the virtual keyboard as well as carry out operations such as right click and left click. When it comes to specifications, the company has a decent offering of an 8.9-inch LED backlit display, the Intel Atom Z515 1.2GHz processor, 1GB RAM, Wi-Fi access, a built-in leg stand and battery life of around 5 hours. 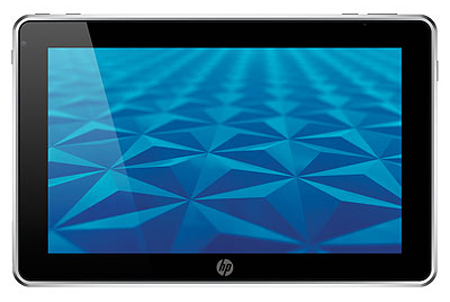 We’ve got to admit that unpacking and repacking bulky laptops is a real hassle at times. When you have something like the HP Slate 500 tablet PC, things might work out a bit differently, especially if you’re a professional who’s always on the move. What’s more, the company seems to have not left out any essential components from its device. There’s a USB 2.0 port for connecting peripherals, an optional optical drive, 64GB SSD memory and the Intel Atom processor. With the 8.9-inch WSVGA touchscreen, you can conveniently browse through the interface. And to provide the added convenience whilst editing, the HP Slate Digital Pen is also amongst its offerings. 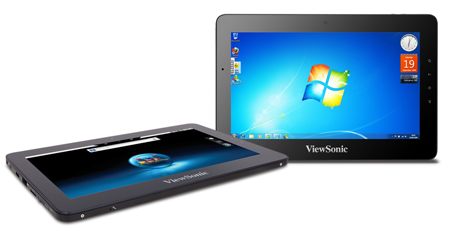 Now what could be so good about the ViewSonic ViewPad 10pro that we’ve put it up on our Windows 7 tablets line-up? Firstly, there’s the dual boot option through which you can conveniently switch between the Windows or Android OS and secondly, a series of productive applications for business users. So now that you’ve got the best of both worlds, this lightweight device comes equipped with a high resolution display, the Intel Pine Trail 1.66GHz CPU and options of either 16GB or 32GB SSDs. And amongst all these features, the ViewPad 10pro is also wrapped with remote desktop support which lets you connect to home and work computers as well as devices on other operating systems. 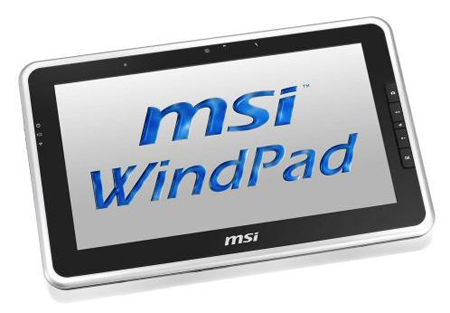 Similar to the Acer Iconia Tab W500, the MSI WindPad 100W tablet brings in its own flavors to the Windows 7 OS. Equipped with an intuitive multimedia application interface, you can conveniently create as well as edit images and videos through the dual cameras or watch full HD movies on the 10-inch LCD multi-touch display. Component-wise, the device is accompanied by the 1.6GHz Intel Menlow processor, 32GB internal storage, 2GB of RAM, a mini HDMI port and the Home Premium edition of the Windows OS. 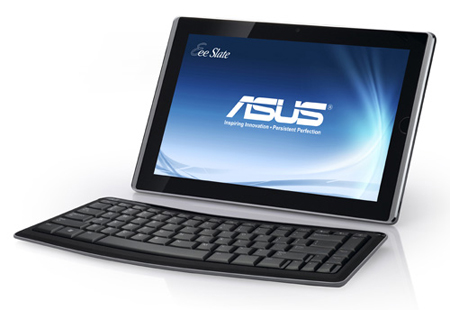 Our list of Windows 7 tablets hasn’t ended just yet. And being the last, this device sets itself apart from all the others we’ve mentioned. This power-packed opponent is most likely to outshine the iPad or any available Android gadget with the Intel Core i5 470UM processor. If that wasn’t convincing, a 12.1-inch LED backlit WXGA capacitive display allows you to watch full HD movies. There’s also 4GB DDR3 RAM in its offerings to deliver better multitasking capabilities. If you love your music and videos, storage options of either a 32GB or a 64GB SSD is at your disposal. Besides all these specs, the tablet weighs around 1.16kg and is wrapped with Bluetooth 3.0 technology, Wi-Fi b/g/n, a 2MP camera and battery life of up to 4.5 hours.

Not satisfied with the best Windows 7 tablets list? You could give the Lenovo ThinkPad X220 or the Dell Duo a look too. Besides these aforesaid gadgets, Microsoft’s next OS could heat up the competition through its mobile-optimized offerings and AMR-based chipset support. But until then, do let us know which of these gadgets have made it onto your Christmas shopping list.