Some people just can’t deal with excitement too well and one recent example is what happened over at Wind Mobile’s Facebook page where a pre-registration page for the Nexus 5 was ‘accidentally’ published on the SNS. Well, that’s not all – Specifications were also provided to interested customers along with a form to stay updated when the device arrives on the carrier.

Now, as you know, Google is yet to make the Nexus 5 official. We’ve seen the device appear on the Play store for a short period of time and various rumors suggested that it would go official by the end of this month. With a day left for October to end, there’s nothing about the handset from Mountain View and no event invites have been issued either. 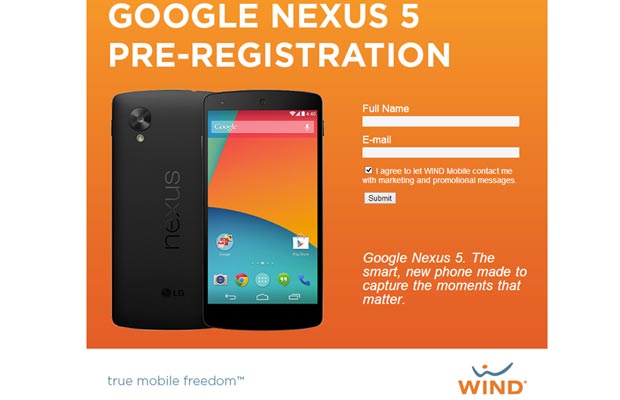 Android Police have managed to snap an image of the pre-registration page before it was pulled down. By the looks of it, Wind Mobile hasn’t used official Nexus 5 renders. The carrier may have utilized the leaked press shots which surfaced on Google Play, so suggests the bad Photoshop work visible at the edges of the handset.

Well, on the bright side, this is confirmation that Wind Mobile will offer the smartphone in Canada. And thanks to @evleaks, you can rest assure that the Nexus 5 will land at Sprint in the US. The famous leaker recently posted images of the smartphone in black and white.

The most recent rumor suggests that the Nexus 5 will go official on November 1 due to a delay. The device will retail for $349 with 16GB of storage.