Will the new iPhone post statuses for your callers on your behalf ?

A strange new Apple patent has come to the fore, suggesting that a new iPhone could bear a provision to automatically set statuses like those on various instant messaging clients. This would basically alert a caller that the person they’re trying to call is either available, away or offline. A number of instant messaging services offer such functions, and so does Apple’s very own iMessage, but it will be first time that such a feature will be applied to calling and that’s not all; it will apparently work in an automatic fashion, not requiring a user to set his/her statuses.

Apple Insider managed to spot the patent filing for this trait on the website of the U.S. Patent and Trademark Office. The document has the company arguing that despite cell phone users possessing the ability to screen calls using caller ID services, these processes are quite inefficient for callers as well as those receiving the calls at an inappropriate time. And it is citing this reason that Apple has created its new mechanism which is said to automatically share a phone’s operational status to callers. 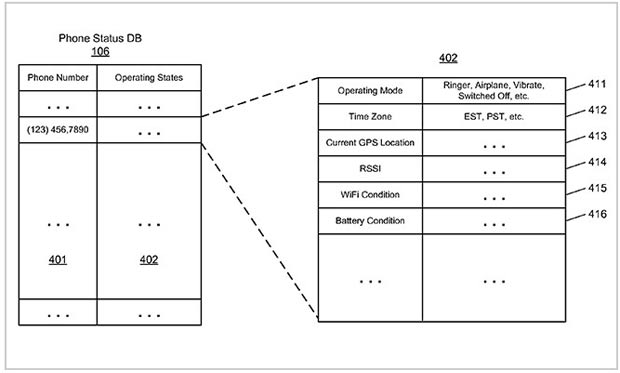 The patented system routinely sends a phone’s state and condition to a cellular network’s server. That means, it accesses whether your device is on ringer or vibration, while it even takes under consideration traits like your location, cellular signal strength and battery life. Of course, these are shared on the basis of user preferences. And then, when a caller attempts to get through to you, they will receive the most recent status information through the server right on their screen.

Now it’s quite obvious that the new iPhone 5S and the iPhone 5C shouldn’t be getting the new technology, but with competition heating up like never before, we’ll keep an eye out for it on future models.