Well over a year after the world was turned upside down by Covid-19, the pandemic continues to inspire surreal developments that would have been hard to imagine not so long ago. Take the recent unveiling of a “smart mask”, the result of a collaboration between Will.i.am and the business conglomerate Honeywell. Officially known as the Xupermask, it’s tailor-made for the new normal – or at least, that’s what the rapper and fashion icon would very much like us to think.

“We are living in sci-fi times,” Will.i.am declared, saying that the pandemic “is straight out of a friggin’ movie. But we are wearing masks from yesterday’s movie. So I wanted to make a mask to fit the era that we’re in.”

Retailing in the US for almost $300, the mask has built-in HEPA filters and fans for ventilation, LED glow lights, and Bluetooth connectivity. Not to mention noise-cancelling earbuds, the ability to listen to music and take phone calls, and the (perhaps appealing) side effect of making the wearer look rather like a cyberpunk version of Bane from The Dark Knight Rises.

That last part isn’t that surprising, when you consider how the mask was made with help from Jose Fernandez, the costumer designer famed for his work on superhero epics like Black Panther and X-Men 2. So, it has the design pedigree, the up-to-date gizmos and the star endorsement, but will the “smart mask” be the way of the future, or just a passing fad? Let’s consider the fate of some other celebrity/tech collabs that have made headlines over the years, with this list courtesy of GamblingDeals.

US rapper Soulja Boy owes his career to sheer audacity. After all, his hit debut single of 2007, Crank That, was self-published online and catapulted him to instant fame and riches. But, while his musical ambitions certainly paid off, the same can’t really be said of his forays into the world of tech. Back in 2018, he made headlines with the unlikely news he was releasing his very own video game console. This was dubbed the SouljaGame, and was accompanied by a handheld version, both with hundreds of games built-in.

The announcement was met by widespread confusion (and quite a bit of hilarity), when journalists and YouTubers pointed out that the so-called SouljaGame devices bore an uncanny resemblance to pre-existing, knock-off emulators that could be bought much more cheaply on Chinese online retailer AliExpress. Soulja Boy himself seemed utterly unfazed by the potentially negative reception, tweeting that he had “tears of joy” and was “just a kid with a dream”.

The dream came to an end just days later, when impending legal action from Nintendo for copyright infringement forced the rapper to withdraw his “products” from the market. But the story of Soulja Boy the would-be tech entrepreneur isn’t over. Just this year, he announced a new handheld gaming and social media device, the TRDR Pocket. The rapper recently tweeted that “Sometimes you need yo feelings HURT so you can WAKE up & FOCUS on you” – could that be a commentary on his failed venture in 2018, and his new attempt at tech supremacy? Well, probably not, but it’ll certainly be interesting to see what becomes of this latest venture.

If there’s a poster boy for a celebrity/tech collaboration done right, it’s surely Dr Dre. Not content with being one of the most influential rappers and music moguls of his generation, Dre took the tech industry by storm in the Noughties when he spearheaded Beats headphones. Back then, he and his business partner – record exec Jimmy Iovine – knew there was a gap in the market for headphones that delivered heavy bass, ideal for hip hop and pop in general. “Man, it’s one thing that people steal my music,” Dr Dre said, referencing online piracy. “It’s another thing to destroy the feeling of what I’ve worked on.”

Countless prototypes were created, with expert input from the likes of Pharrell Williams, Gwen Stefani and Will.i.am. Dre and Iovine went about the launch of the headphones as if it was an album, with the sheer star power of Dre himself propelling the brand into the limelight. It certainly helped that basketball icon LeBron James took a liking to Beats, leading to the entire 2008 US Olympic basketball team pictured wearing the headphones.

More than a few eyebrows were raised when, back in 2010, Polaroid announced it was partnering with Lady Gaga. A bleeding edge pop star known for pushing the aesthetic envelope, working with a dusty old has-been of a brand? It sounded unlikely enough to be intriguing, and Lady Gaga herself seemed genuinely thrilled at the prospect. She spoke about “blending the iconic history of Polaroid and instant film with the digital era”, and even had a sense of humour about the collaboration, saying “I am so excited to extend myself behind the scenes as a designer, and as my father puts it, finally have a real job.”

The intrigue around the partnership came to a head at the 2011 Consumer Electronics Show, when Lady Gaga took to the stage to show off… sunglasses. But not any old sunglasses. These giant, angular, ugly-chic and admittedly very Gaga-esque shades from Polaroid had a built-in video camera and a pair of LCD displays in the lenses, so footage could be immediately played back for anyone around the wearer to see. A creative director involved in the creation of these GL20 Camera Glasses told the media that the singer was “fairly involved with the process”, while Polaroid proclaimed that the eyewear was “part fashion statement, part revolutionary technology and part-tool for self-expression.”

Unfortunately, not a lot expressing was destined to be done with the glasses. They were never commercially released, and in 2014 Lady Gaga and Polaroid officially parted ways. Call it a bad romance.

Finally, we come to perhaps the oddest celebrity tech endorsement of all time. Say what you like about Lady Gaga donning bizarre Polaroid specs, or Soulja Boy trying to take on Sony and Nintendo, but they were at least dealing with recognisable, viable pieces of technology. But what is anyone to make of football megastar Ronaldo’s hawking of a gadget that apparently improves “facial fitness”? 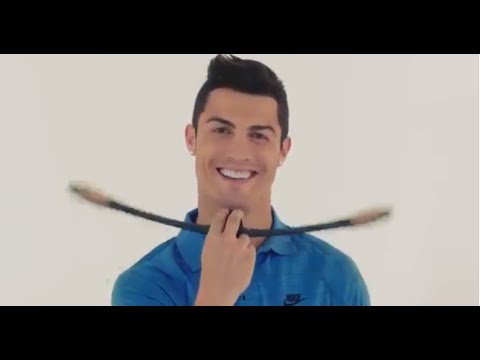 This happened in 2014, when Ronaldo became the face of Japanese brand Facial Fitness PAO. “In my everyday training sessions, there is one area of my body that I hadn’t been exercising: my facial muscles. That is, until I discovered PAO,” the footballer said, to the delight of the world. Even funnier was the TV ad, which immediately went viral for extremely understandable reasons.

The ad features the star doing a bunch of headers (because, you know, he’s a footballer) before waving the bizarre, wobbly, mouth-filling device at the camera. Perhaps wisely, Ronaldo at no point inserts the thing into his own iconic mouth – that’s left to the hapless actors in the ad, who gamely clench the device and bob their heads up and down, shedding all dignity in the process. To be fair to Ronaldo, this was clearly something he did for a quick pay cheque rather being any kind of passion project, and he’s probably forgotten all about it. Even if YouTube hasn’t.